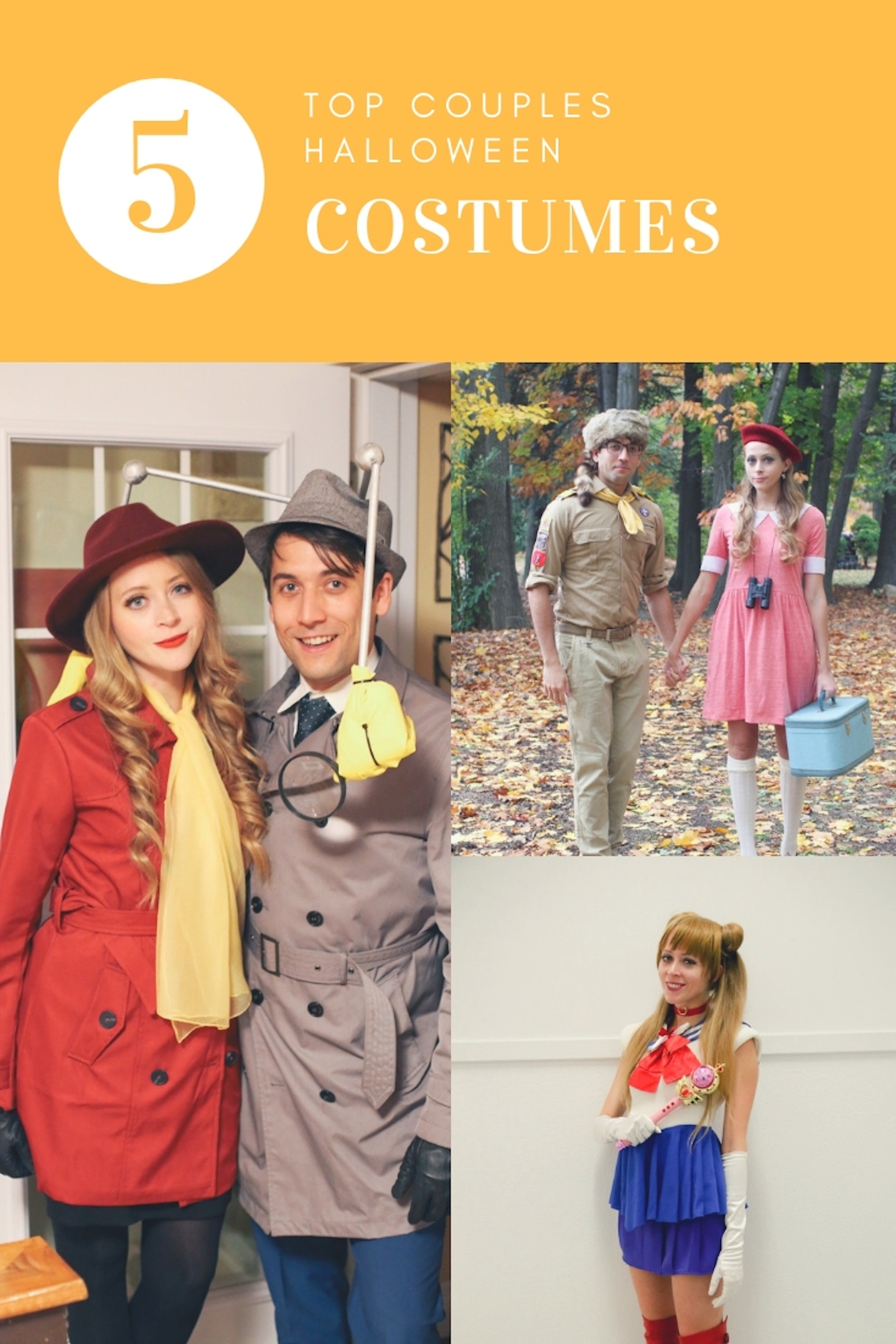 Daniel’s Flynn Rider costume was very intense and involved reconstructing a suit jacket from the thrift store into a vest. He used buckles from an old pair of boots and grew out his hair for months (I told you I’m serious about Halloween). I think he should grow out his hair again! It was such a fun costume, and I’d love to do it again, but with a more accurate dress on my part. I was more inspired by the pinks and purples in Rapunzel’s look than being accurate. I also love the chance to rewear an expensive costume from my ballet days!

While I haven’t had the chance to do The Nightmare Before Christmas as a couples costume yet, I would love to dress up again as Sally and Jack Skellington.

My Sally dress is from Hot Topic, and I paired it with an orange wig, blue tights and blue skin makeup to complete her look. For Jack Skellington, all you need is a pinstripe suit, and a mask which you can find at the Disney Store or a local costume shop.

A few years ago, we attended a Wes Anderson Halloween Party dressed as Sam and Suzy from Moonrise Kingdom. For our Moonrise Kingdom Halloween Costume, I added a collar to a GAP dress, added some knee-highs and accessorized with a red beret and suitcase. I wanted to take Mousse out for the pictures, but didn’t want to lose her in the woods.

Daniel’s Sam Moonrise Kingdom Costume was super easy. He wore his old Scouts uniform, and I picked up a raccoon hat from a souvenir shop in Ottawa, which was so lucky. These hats were very hard to find in Toronto that year (probably because of the Wes Anderson party) so I found one in a different city. If you’re planning on recreating this Moonrise Kingdom Halloween costume, make sure to pick up one of these hats from a vintage or souvenir shop ahead of time!

One of my crowning Halloween costume achievements was reusing an old Sailor Moon Costume and finally having my own Tuxedo Mask. When Daniel and I first started dating, I desperately wanted to be Sailor Moon, but it took a while for him to come around. Finally, we got to create this Sailor Moon and Tuxedo Mask couples Halloween costume, and I think we executed it pretty well.

My Sailor Moon costume was sewn by my mom when I was in grade one. She clearly made it way too large, so I was shocked I still fit into it, though I had to layer a blue skirt underneath! My favourite part of my Sailor Moon Costume was definitely my red over-the-knee boots I borrowed from a friend. They really sold the look! I also made my moon choker out of a ribbon and a moon necklace from Forever 21, however, Hot Topic now sells a Sailor Moon choker. Of course, I still had my Sailor Moon wand from when I was a child, so keep your eye out in thrift stores or order one online.

The Tuxedo Mask costume was super simple. Daniel just had to wear a black suit, top hat, mask, and a cape. I got a Dracula cape from the dollar store and flipped the red collar inside out. It was super simple on his part!

For my Carmen Sandiego costume, all I needed was a red trench coat, red fedora and a yellow scarf. This look was so nostalgic, as it was one of my favourite TV shows as a kid!

An honourable mention goes to one of my favourite costumes, Elsa from Frozen. While this is not a couples costume, I loved creating this Elsa Frozen Halloween Costume out of an old sequin dress and curtains! I’d love to recreate this look again someday, with Daniel dressed up as Olaf.

I hope you all have a spooky Halloween… I can’t wait to share our Couples Halloween Costume this year… any guesses? Let me know in the comments below.