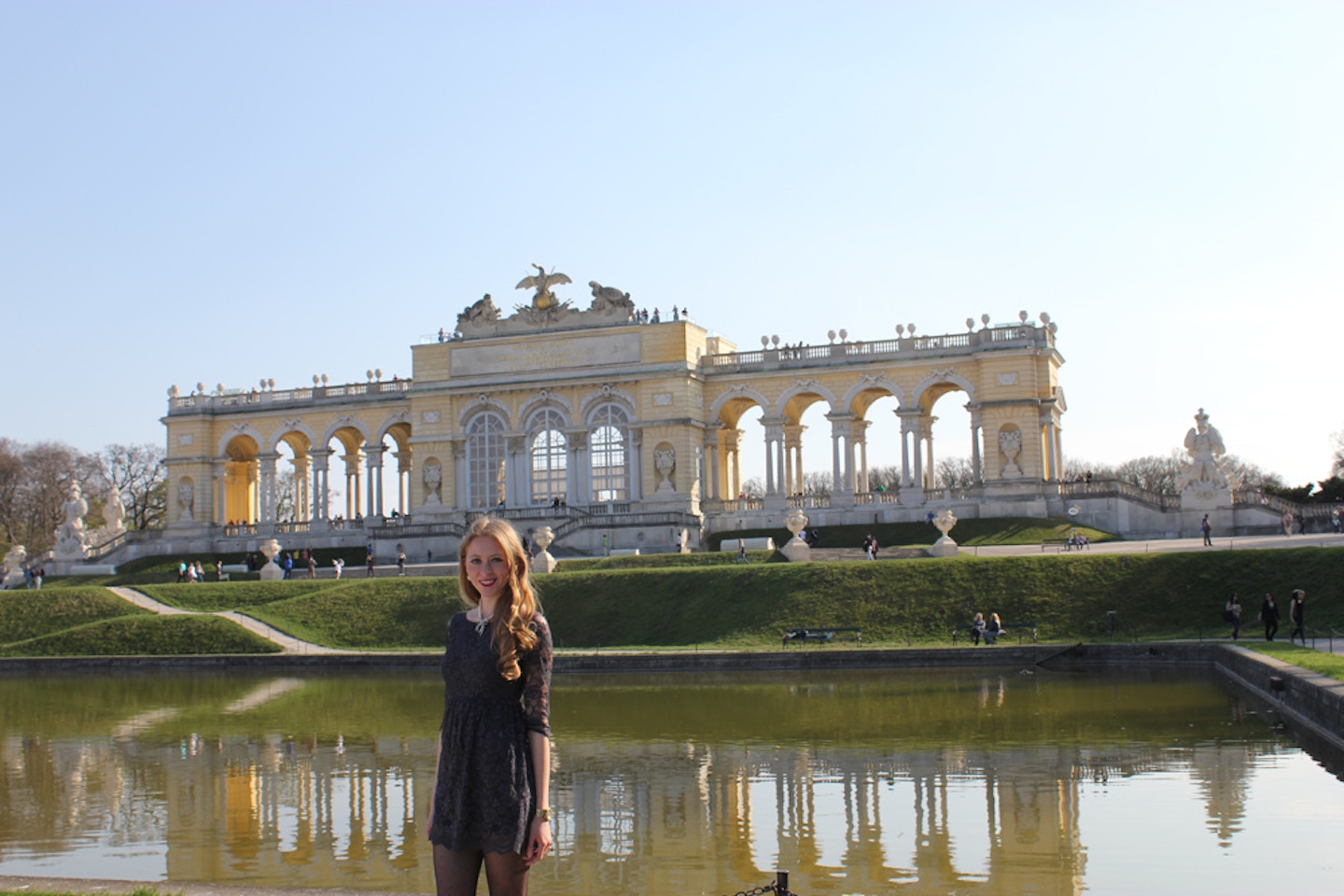 Like most European cities, Vienna has a castle…not one, but two castles which are exquisite examples of the Hapsburgs’ regal flair. Schloß Schönbrunn, or the summer palace of Vienna was a gorgeous estate with fully furnished and restored rooms in Rococo style, (Versailles couldn’t even come close to it), the oldest zoo in the world and gorgeous gardens.

Schönbrunn means “beautiful spring” which explains that it was a summer residence for Maria Theresa (the mother of Marie Antoinette) and then later Empress Sisi.

We became obsessed with the Empress and her scandalous outlooks. Sisi, or Empress Elisabeth as she was formally known, didn’t like to eat and spent most of the day exercising to keep her slender physique. She hated royal protocol and was a non-conformist, and even though she didn’t spend much time at all in Austria, she seems to be the image of the old empire.

Sisi was very tall at 5’8″ (just like me) and despite having four pregnancies, she always kept her weight at 110 pounds, which is crazy even by today’s saddistic standards. She was even the first to go on fad diets of juice and raw beefsteaks or just eggs. Sisi was famous for her waist of only 19″ in a corset, a feat reached today by some freaks showcased on TLC.

She was regarded as a great beauty and kept her hair long…supposedly it took hours every day to put her hair up. But Sisi was a natural beauty, and didn’t use cosmetics or makeup that were very popular during the time period. She had a tragic life and lost many of the people she loved until she was assassinated as well in Geneva. You could almost compare her to Princess Diana, who also had a bad relationship with the Royal Court, died tragically and was known for her beauty.

The Sisi star was a 10 point star of diamonds fanning out from a pearl. Heinrich Köchert designed 27 of these stars for Sisi to wear in her hair. I was captivated by the melancholic story of Sisi and had a buy a pair of earrings.

The interior of the palace was restored to its original splendour (Versailles needs to take note…) and furnished with some original Rococo pieces. I fell in love with the rich red pineapple damask pattern, which was an official royal Hapsburg textile, and the ornate gold mouldings and decoration on everything. Photos weren’t allowed so I only got to sneak a couple inside.

This ballroom, with a hall of mirrors was restored to its original aesthetic during Maria Theresa’s reign as Empress. The walls were immaculate with glossy white paint, gold edging and candelabras that had flickering candles. It was so stunning!

The castle was beautiful outside as well. But why the yellow colour? The castle was originally supposed to be blue, but yellow was the cheapest pigment! I personally like the pale butter shade.

The grounds were lovely as well. Landscaped to perfection.

On the top of the hill was a Gloriette that overlooked the castle and all of Vienna.

Not only is the Gloriette stunning to look at, the perspective of the castle and city was so pretty on a sunny day. Children were playing and students were laying out on the grass in the sun. Joggers seemed unaware of their picturesque surroundings.

A perfect way to spend a sunny day in Vienna…