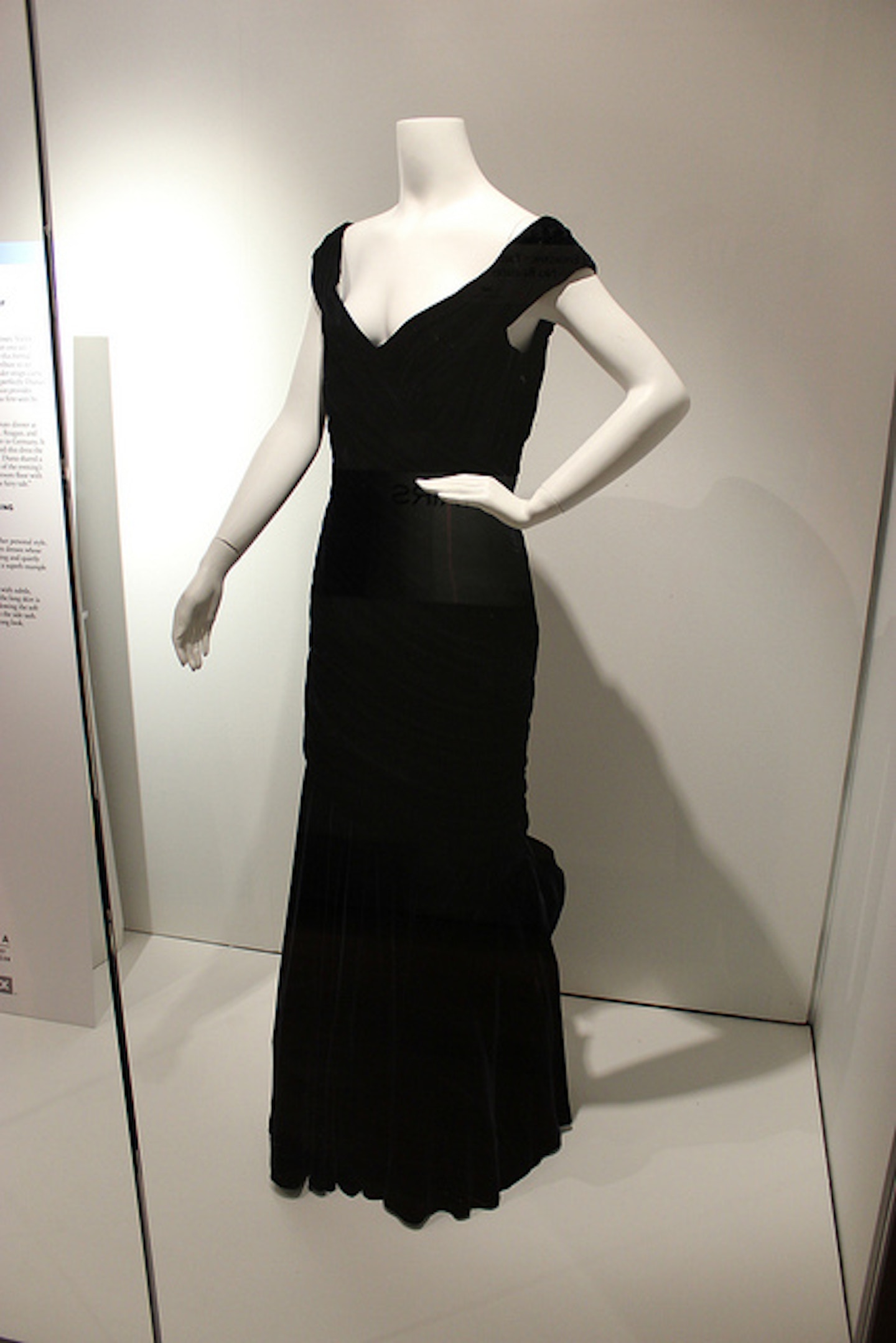 Tonight, 14 dresses once belonging to Princess Diana will go on sale at Waddington’s auction house in Toronto.  This is follows after an exhibit which has been on display at the Design Exchange for over a month.  I got an exclusive peak at the collection when it first opened.

When I exited the elevator onto the third floor of the Design Exchange building (formerly the Toronto Stock Exchange) yesterday I was greeted by an embroidered dress behind a glass case.  The dress left me in awe, not only for its timeless beauty and colourful beadwork contrasted with feminine pink silk; the dress had belonged to the late Princess Diana and is one of the 14 dresses on display at The Life of a Royal Icon exhibit.

Maureen Rorech Dunkel purchased all 14 of these dresses in 1997 at the infamous Christie’s auction in New York City where Diana auctioned off 79 of her evening gowns for charity only eight weeks before her tragic death.  Dunkel purchased the gowns as an investment opportunity (she told me she paid $870,000 for the lot), and when Diana died, she didn’t want to be in the spotlight.  “I had to do something important with this collection,” said Dunkel, who started a charity tour with her capsule of gowns across the United States, Canada and New Zealand before they stayed at the Royal Palace in London for 10 years.

The original slogan of the Christie’s auction was “Sequins Save Lives” and Dunkel believes that the charity tour “piggy-backed” on that concept and used Diana’s beautiful things to do beautiful things for other people.

The collection features dresses made exclusively by British designers, which is one of the reasons Design Exchange’s president and CEO, Samantha Sannella chose to house the exhibit.  “Out of all the women in my generation, she used fashion the most.  [Princess Diana] helped British designers further their career.   If we all did that, it creates an industry,” said Sannella.

Dunkel decided to put the gowns on auction because as an investor, it was finally the right time.  And with the buzz surrounding the Royal Wedding and the newlywed’s first trip to Canada in June, the timing couldn’t be more perfect.  The dresses are being auctioned off today, on June 23 by Waddington’s, an auction house based in Toronto.

So this might be the last time all the gowns are shown together.  As I viewed the collection, there was definitely a narrative present. Sannella calls it, “From frumpy to fabulous.” The Zandra Rhodes gown featuring angelic cream fabric in an Edwardian inspired silhouette captures her youthful innocence, but as the collection progresses, stunning dresses in deep jewel-toned velour reflect Diana’s evolution into a Royal style icon.  A stand-out piece is the infamous “John Travolta gown” where Princess Di danced with the movie star at a White House State dinner hosted by President and Mrs. Reagan.  The deep navy velvet gown designed by Victor Edelstein is as elegant today as it was over 25 years ago.  My personal favourite is the cream silk dinner dress by the Princess’ beloved designer Catherine Walker. The dress was featured in a Vanity Fair feature article in 1997, and it embodies Diana’s refined and sophisticated style with its modern cap-sleeved silhouette.

You’d think that owning a priceless collection of dresses belonging to a Princess would tempt Dunkel to take a dress for a spin, but Dunkel says, “Her DNA is a lot more special than mine!”

Click here to view my gallery of the dresses.