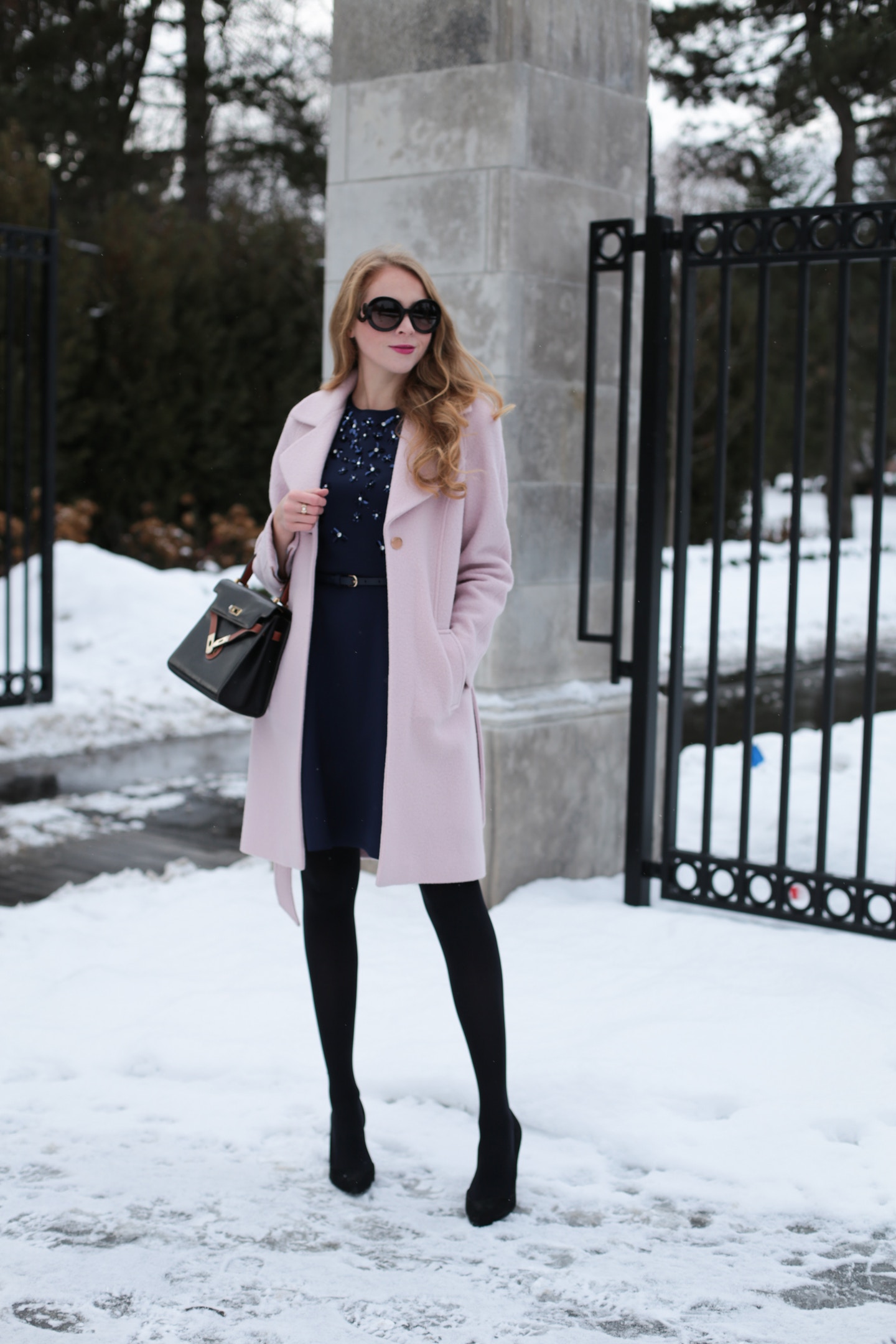 Today, I’m sharing Jackie Kennedy Inspired outfit with a modern twist. Last week, I saw Jackie, and Natalie Portman was incredible in the film. The film was so intense, emotional and full of sorrow. Portman’s accent was absolutely perfect and I love the way the story was told. Jacquline Kennedy Onassis’ influence on 20th century fashion is undisputed. The film even pokes fun at it. Jackie is in her car, worried about her future as a presidential widow, and sees store displays with mannequins featuring her signature suit set and brunette bob.

This Ted Baker coat is very reminiscent of the 1960s. The soft lavender pink pastel colour and feminine rounded shoulders evoke the era. A lot of coats from that time period (and even one Jackie wore) featured no contrasting hardware, and I love how this coat has no distracting buckles or extra frills. The simple single rose gold button is a modern update on the typical wool-covered buttons.

The shape of this coat reminds me of two coats Jackie Kennedy wore, including the ivory one pictured above and a red one designed by Givenchy, which featured a similar rounded shape at the shoulders. Of course, a pink coat is tragically synonymous with Jackie Kennedy Onassis, and has recently grown in popularity thanks to Raf Simons’ final bow at Jil Sander. I’m loving the vintage shape of this coat, as well as the soft, pastel colour. The blue undertone makes it less of an “easter pastel” and more of a variation on winter white. The magnolia printed lining elevates the wow factor of this coat.

Jacqueline Kennedy Onassis often wore black box bags, so I paired a vintage leather bag from Italy. While the style is reminiscent of bag named after another American Princess (fun fact, it was only renamed the Kelly in 1977), I thought it added the perfect formal touch to the outfit.

I also opted for simple stiletto pumps. After seeing Jackie, I noticed that Portman’s costume, especially during the White House tour scenes, included high heel stilettos. I recently watched parts of the Kennedy White House tour, and while researching for this blog post, noticed that Jackie’s choice of footwear was usually lower, boxy heels. A very interesting choice considering her feet were a size 10! I loved the modern approach costume designer Madeline Fontaine took with sleeker stilettos, so I incorporated that into the look.

This embellished skater dress, also from Ted Baker, exudes a modern touch in practical neoprene. The dress has similar elements to a Givenchy gown Jackie wore to Versailles, featuring the same neckline and floral beading. I am in love with the scattered beading, hourglass shape and rich navy colour. The best part about this dress is that the neoprene is so comfortable and warm to wear. Jackie Kennedy often wore practical, comfortable pieces (especially in Greece and Italy), so I’m sure she would have been a fan of this number!

And last, but definitely not least, I channelled Jackie O’s signature large sunglasses with this Prada pair. The Prada minimal baroque style was popular several years ago, and they were my first luxury purchase! I was so proud to own these right when they came out. Lately, I’ve been wearing these a lot more and love their oversized round shape, that’s still very flattering. The incredible arm designs really make these special though! If you’re thinking of getting a pair, I love them in wood and black as well, but the tortoiseshell is still my favourite.

The film, Jackie, is a must-see. It was one of my favourite films of the year, and Portman was perfection as she portrayed the heavy grief and sorrow. Many elements made the film great: the score was piercing, the cinematography flipped the public’s reconstruction of events and reversed the angle on the fateful motorcade in Dallas, pulling you into the horror of the scene, and into Jackie’s perspective. There were some really immersive visuals, and I can’t wait to see the film get more buzz during awards season. The element that really stood out to me though, was the costuming. The symbolism behind the pink suit, and Jackie’s reluctance to take it off, told a story about what she was feeling inside, and reflected the horror of the incident to the world.