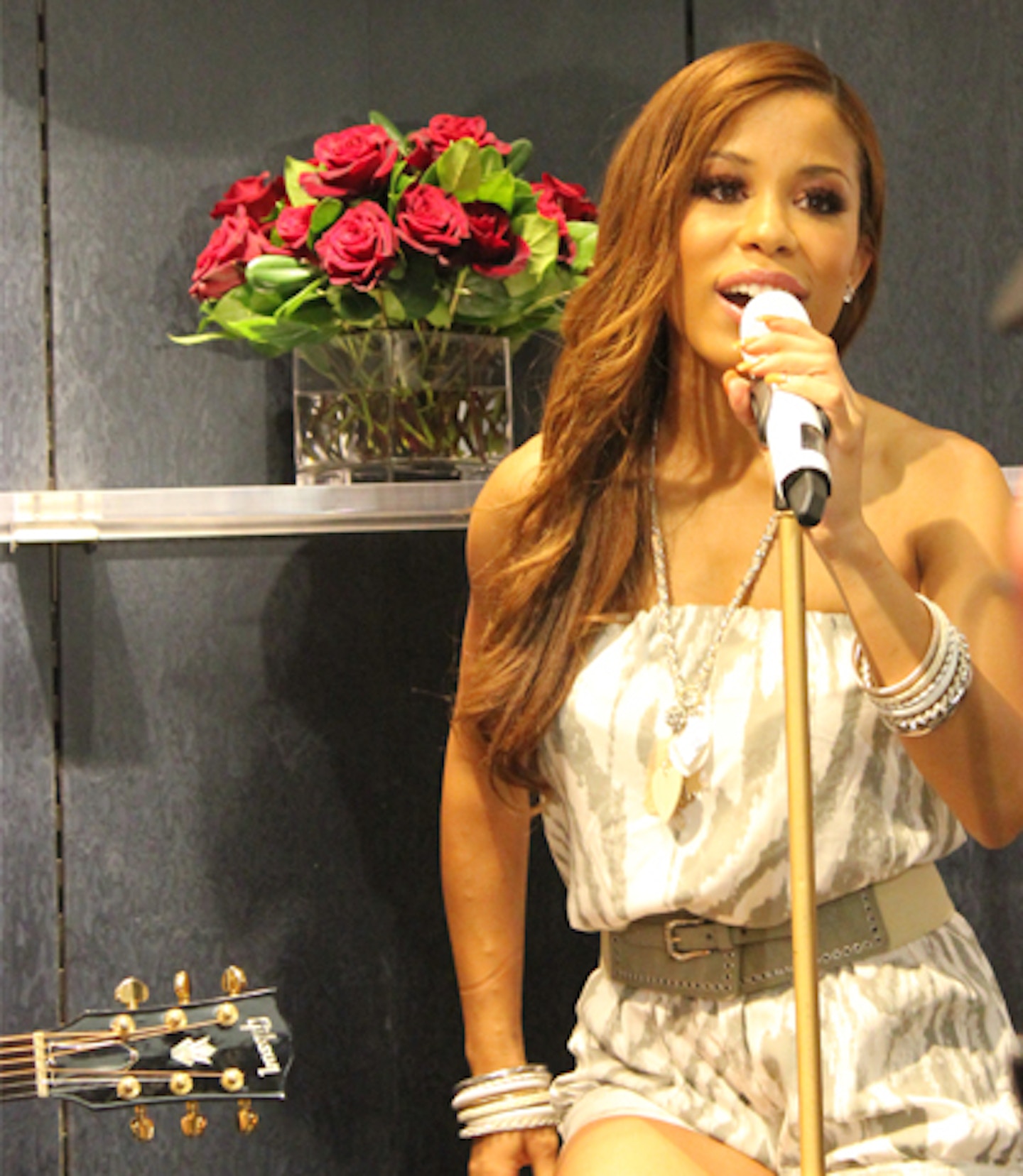 Yesterday, on her 23rd birthday, musician Keshia Chanté performed an acoustic set of her two latest singles to a packed audience at the opening of the new flagship GUESS store on Queen Street West. The event was in support of the Canadian Foundation for AIDS Research, or CANFAR, for which Chanté is the youth ambassador.

The Ottawa, Ont. native first broke into the music industry at the age of 14, and has since won numerous accolades including a Juno Award for best R&B/Soul recording in 2005. Chanté released two albums, and her newest, Night & Day is set for a 2011 release.

What was the inspiration behind your new album, Night & Day?
Inspiration for my new album comes from my diary, which is like love, life, and all that personal stuff. It was heartbreak, going through that whole process, and the other half of it I would say is fashion.

Do you think your two-year hiatus allowed you to grow as an artist?
It totally did. I didn’t have to take a break, I think I made that decision because I wanted to make music that I really felt happy with. I didn’t really know kind of what I wanted to do, and I think that if you don’t know what to do and you don’t go out there with a purpose, it’s pointless. Because what you do is an energy, and you’re kind of spreading it and people are taking it in. So you got to be careful what energy you’re putting out. And if you’re not in a good place you’re not going to project positivity, and I think that’s what I was waiting for.

How was it like to work with Taio Cruz?
He’s awesome! He’s an amazing songwriter, and a lot of people don’t know that he was actually an artist in Canada before he kind of broke out. He’s an amazing talent, and I think that when you hear that song, it’s definitely a Taio Cruz song.

It also sticks with you…
Yeah, it’s super catchy, and he’s awesome like that.

On your new album Night & Day, is there a side you like more?
Ooh, that’s hard. I love the night side, cause it’s dance music so it’s like Table Dancer and Set U Free, and it’s fun, it’s in the club. But I love the Day side because you really hear cracks in my voice, and it’s really raw. I appreciate that as a singer, I want to hear something personal, and you hear that on the Day side.

So besides your natural talent, what other elements made you become a successful artist?
I would just say life! Being a songwriter has really affected what I do. I was always a singer, but never an artist and I feel like I’m an artist now.

How has your experience been as the youth ambassador for CANFAR?
Amazing, I actually went to Africa for ten days, and it was pretty life-changing. I wake up every morning and I have a better sense of purpose. I want everything I do to matter. I care about how I spend my time, and I don’t complain. I used to have what I call OCD, a total germaphobe! Not necessarily with people, with just things. Especially when you’re on tour and you’re doing nightclubs, which can be uncomfortable. But once you’ve been there and you see the devastation, it really changes how you feel about things. And honestly it’s one of the best experiences that has happened in my life.

What’s your personal mission working with CANFAR?
The start of it’s really happening today. I’m doing an event for fashion and I’m singing and I’m working, but you know what? The proceeds are going to CANFAR and I think that’s a dream! Especially for my 23rd birthday, I couldn’t imagine anything better.

So you’re busy promoting on your tour, how do you take time to relax and recharge?
I hang by the pool, watch movies, it’s really hard for me because I don’t do time off very well! (Laughs) I go crazy! I can’t do a day off, I go nuts. When I do a day off, I’m editing footage, updating my blog or something. But I never really have downtime. But if I do, I’ll read a book, maybe shop. Oh shopping! I forgot, shopping is therapy, I totally forget that that’s what I do.

What’s your personal style?
I think it’s kind of glamour, but it’s casual. I don’t wear anything that’s too excessive, but sometimes I won’t be comfortable for the sake of fashion, other times I will be

I’ve noticed that you wear a lot of Canadian designers, how important is it to you to promote local design?
Well I’m a Canadian artist, and Canadian artists support me and I support them. And it’s just like Stereos came out tonight, and to me, that’s support and there’s other Canadian artists in the room that came out to support me, and it really means a lot to me. It has to extend movies, film, of course music, radio and fashion. It makes sense, we should all love and support each other.

To find out when Keshia Chanté will be performing near you, or to read her blog, visit www.keshiachante.com