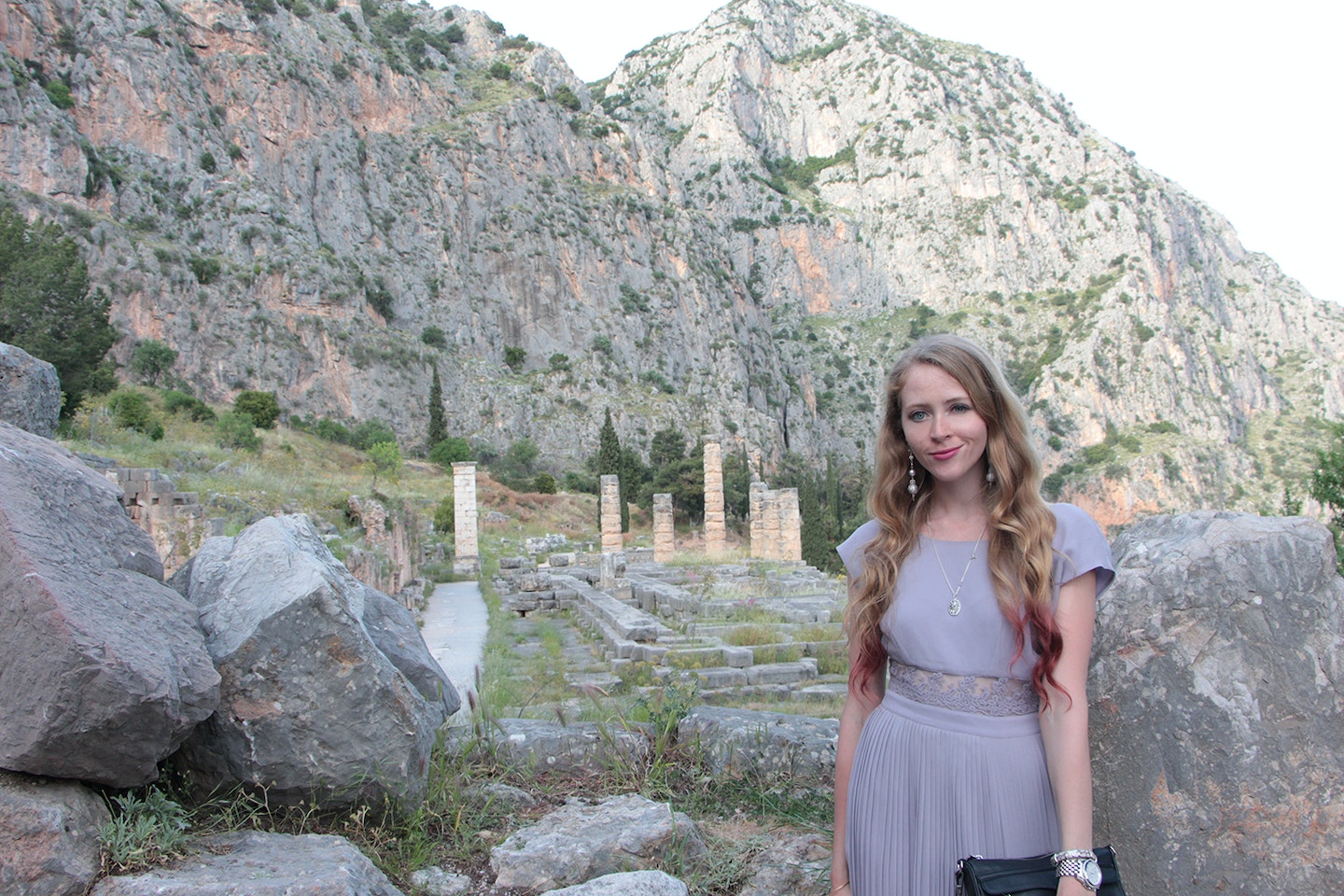 In the middle of our trip, after a few long bus rides from Nafplio to Patras, we headed to Delphi. The ancient sanctuary of Delphi is about three hours away from Athens, and was along our route to the airport, so we made a one-night stop to visit the archeological site and the Delphi Museum. We arrived near the end of the day, after the most breathtaking bus ride ever along the Bay and through mountains, and managed to make it a couple hours before closing.

The Delphi archeological site gets very busy by midday, with tour buses arriving from Athens, so it was great that we visited both in the late evening, and in the early morning before our bus ride back to Athens. There are hundreds of sights at Delphi, including the imposing Temple of Apollo, which still has a few columns standing.

It was incredibly hot that day, so I wore a light purple pleated chiffon dress from Urban Outfitters, comfy Ipanema sandals, my Rebecca Minkoff Mini Mac and a Michael Kors silver Pressly watch.

We started at the Delphi archeological museum, which had hundreds of artifacts and pieces of buildings recovered in archeological digs. The kouroi above were very large and impressive, but the most incredible was the bronze statue of a chariot racer. I can’t imagine how many beautiful bronze sculptures were melted down into shovels, to find this one so in tact, is nearly a miracle.

The Sanctuary of the Athenians was partially restored, to give a sense of the structure. I can’t imagine how this site would look like thousands of years ago, filled with monuments and pilgrims. I joked that there would be tourist shops along the way for ancient Greeks to buy monuments and offerings, and I was right. There was even a “shop” in the Roman stoa near the entrance of the site.

One of the coolest sights in this attraction were both the rock where the oracle occurred, and the omphalos, an egg-shaped rock. What’s special about this rock is that it is completely smooth, yet has no carving marks. The legend says that Zeus sent two eagles from the East, and one from the West, and when they met in the middle, they dropped this egg, marking the centre, or navel of Gaia, otherwise known as the navel of the Earth.

The theatre at Delphi is very large, and has an incredible view of the mountain range. The site was carved into the foothills of Mount Parnassus, in the valley of Phocis.

We had just enough time to climb up to the top of the sanctuary to visit the Stadium at Delphi, which was a Roman-style stadium and hosted athletic games every four years. The Pythian games were very important, second only to the Olympics.

The next day, we had some time in the morning to visit the Gymnasium (which was sadly closed), and the Athena Pronaia sanctuary. We also met some cute furry friends along the way! The sanctuary was impressive and very peaceful. Maybe it was because we were completely alone, but the fresh mountain air and stunning views made it clear why this site was so spiritual and important to the ancients.