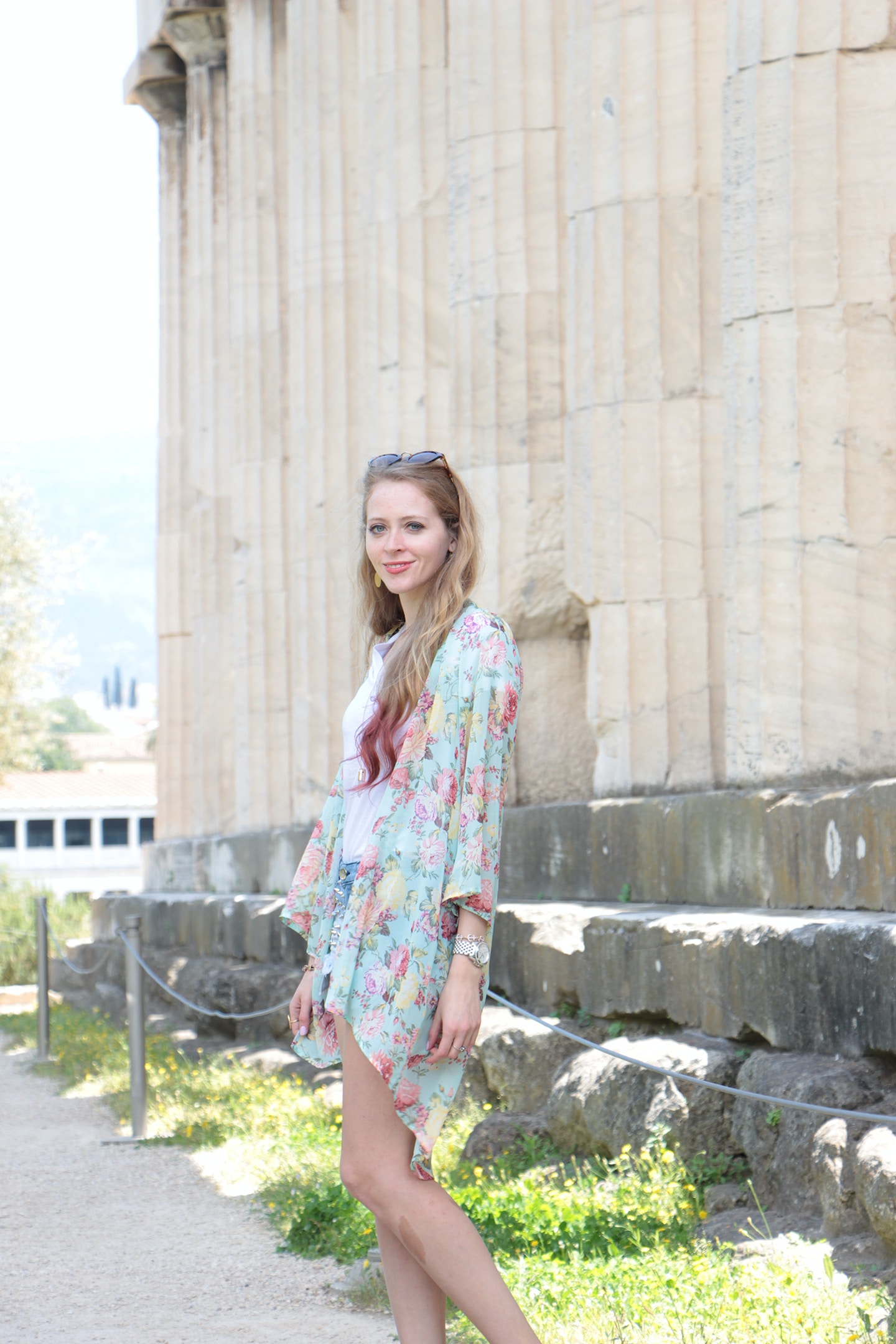 On our second full day in Athens, we decided to visit the Ancient Agora, which is adjacent to Monastiraki and near the Acropolis. On our first day, we thought we had visited the site, only to realize we visited the much smaller Roman Agora, south of Monastiraki metro station. The Ancient Agora is a much larger site, filled with ruins and interesting buildings.

The main building was rebuilt in part thanks to the Rockefellers. It was impressive seeing the structure, and imagining a whole site with large buildings like this. That day, the weather started to heat up, so I wore a white tee from Forever 21, a mint rose print kimono (similar here), cut off shorts from Fitzroy Boutique, sunglasses from H&M (similar here), a black Mini MAC bag by Rebecca Minkoff and comfy Birkenstock Gizeh sandals in silver for trekking through the ruins and streets of Athens.

Inside this main building, is the Agora Museum, which displays funeral and grave pieces, which give a clue into daily life and customs. One piece that fascinated me (I can’t seem to find the picture), was how jury duty was selected among citizens. They would place a lead pegs with their names across rows into a marble board, and then in a vertical slot, black and white marble stones would be dropped. A black stone would dismiss jurors in that row, while a white stone would select that row for jury duty. This fair system was simple, yet elegant for around 450 B.C.

Outside, were many ruins, including what is believed to be Socrates’ prison, an ancient wastewater system and administration buildings. Of course, there were a couple cute kitties along the way.

One of the best parts of this site is to see the somewhat intact Temple of Hephaestus. The imposing structure gives you a sense of the grandeur of what old temples were like thousands of years ago, and the impressive architecture still has a partial roof. The temple is at the top of the hill and offers amazing views of the Acropolis behind.

Afterwards, we headed to the Kerameikos cemetery. Included in the admission to the Acropolis (the Ancient and Roman Agoras were as well), the cemetery is a peaceful and less frequented place to visit. The site was excavated recently, and areas of the cemetery are yet to be unearthed. It’s estimated that one third of the population died due to a plague in 430 BC and remains were scattered in the area.

The site contains many archeological sites, including the Sacred Way, and ancient city walls to protect Athens. There is also a museum containing original funerary monuments and pieces of pottery recovered from the site.

It was again a long day of walking, but in between shopping and delicious food breaks, our second full day in Athens was interesting and full of exploring.