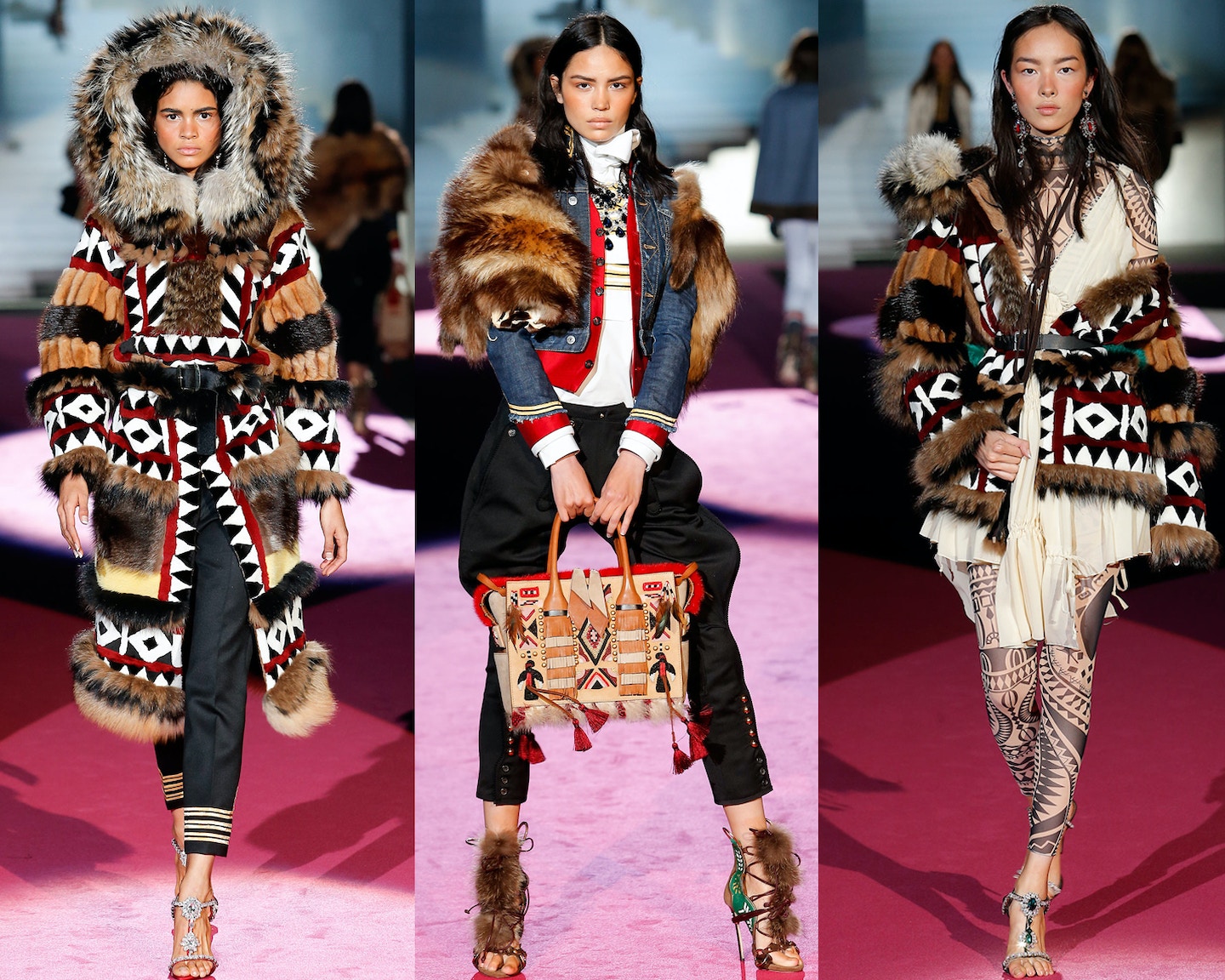 On Monday, Canadian designer twin duo, Dan and Dean Caten of DSquared2 presented a collection inspired by the “enchantment of Canadian Indian Tribes” contrasted with the “confident attitude of the British aristocracy.” Without seeing any photos of the actual collection, the description and “inspiration” alone is troublesome. The designers are describing an indigenous culture as enchanting, importing a sense of mysterious allure while colonialism is described as confident – alluding to the militaristic jackets and embelished epaulettes of the collection. To make matters even worse, DSquared2 entitled this line DSquaw, which imports a derogatory term to Aboriginal women, probably the most marginalized group in Canadian society today.

Models wore pieces with a British influence, featuring tweed blazers, vests and military style buttons and adornments, while wearing tribal “tattoos” via printed tights and make up. This bizarre clash only gets worse as the collection goes on, when blankets, furs and imagery take over the runway in full out cultural appropriation.

Look #21 features a poncho with Navajo print. Navajo textiles are from the Four Corners of the southwestern United States and in no way have anything to do with the “enchantment of Canadian Indian Tribes.” Not only are they appropriating culture, they’re doing it so generally and liberally they can’t even properly attribute the inspiration. In no way are they respecting the inspiration. They’ve turned cultural and sacred motifs into costume for the sake of a runway show.

Not only that, they’ve blatantly stolen the designs of Native American artists. On the brand’s Facebook page, a woman shared a photo of her mother’s work, which looks uncomfortably close to Sandra Okuma’s piece. These pieces are works of art, and not just fashion bags to layer on for a cool street style shot.

This isn’t inspiration, it’s downright cultural theft and disrespectful, especially when contrasted with the colonial Western pieces in the collection. As Canadians, Dean and Dan Caten represent Canada at Milan Fashion Week on an international stage. To create a collection that transforms a culture into costume is wrong. To call the line DSquaw is an abomination. As this blog eloquently puts it, it’s as if they called the line D-CUNextThursday.

This semester, I’m taking an Indigenous law course, and have only scratched the surface of some customs, kinship and creation stories of the Anishnaabeg. I think anyone can benefit from learning about our Indigenous cultures, and hold them with respect and reverence.

I think the fashion world can learn something about Indigenous culture and not title a video depicting the DSquared2 Fall 2015 DSquaw show as “Eskimo-Inspired Opulence.” They’re Inuit, and there’s nothing opulent about this. Eskimo Aristocrats… the designers invent a story that the Eskimos in the Northwest Territories get a suitcase of opulent clothing and start playing dress up. Great, now they’re depicting the Other as subordinate and childish too. Anna Dello Russo then describes the feel of the collection as Canada, Indian, Mountains and photographer Bruce Weber. The designers then go on to talk about all the research that went into the collection and that it’s real and authentic. I hope that no Canadian retailer will stock or support this collection in any way… I sincerely hope the designers are just ignorant and this was not a malicious way to garner press for their fashion line… unfortunately at the expense of generalizing and offending Indigenous cultures.