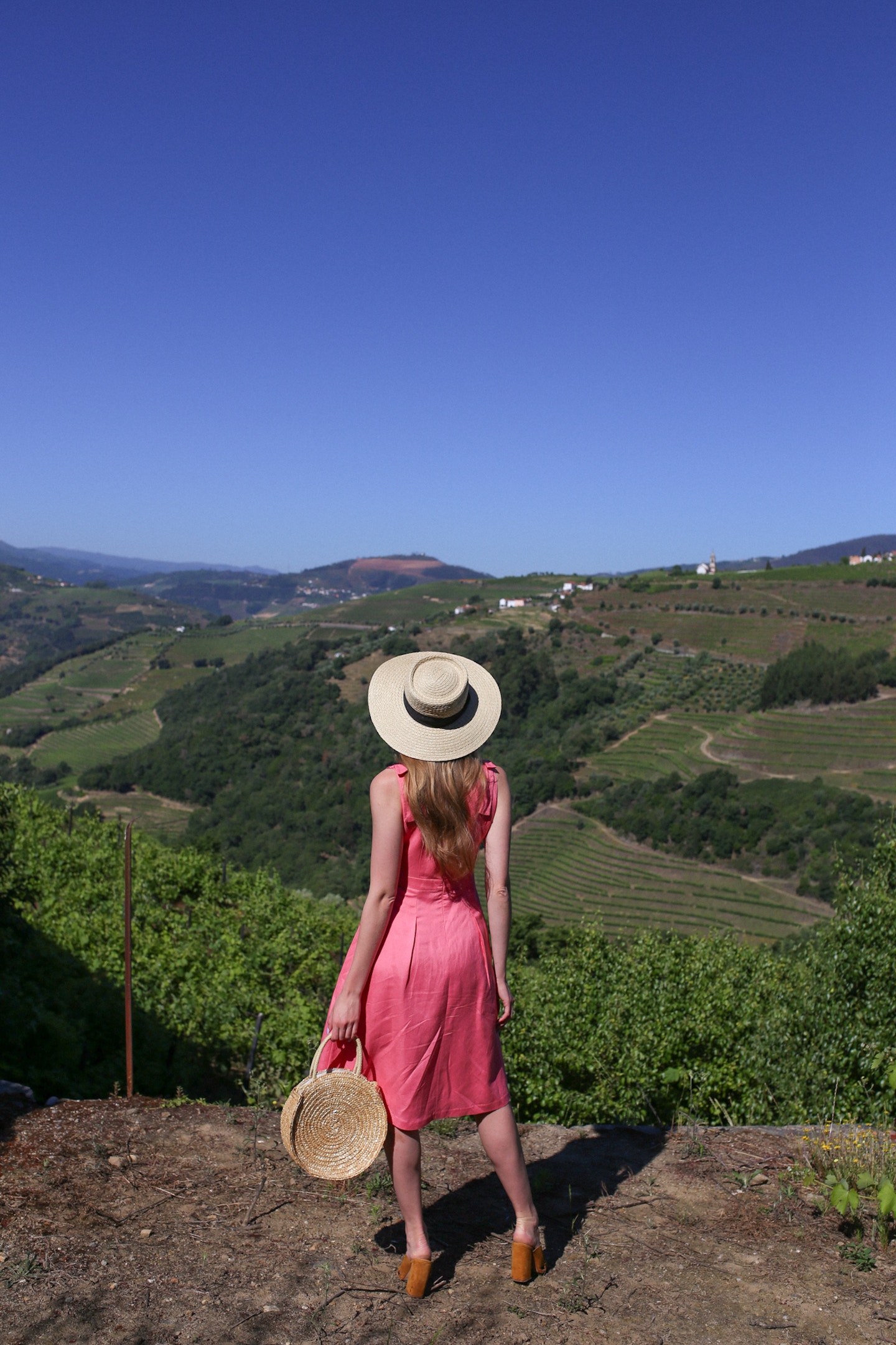 One of the most magical moments in Portugal was staying at Casa das Torres de Oliveira. A manor home, dating back to the 15th Century, this gorgeous hotel is located in Mesão frio, in the heart of the Douro Valley. We only spent one night at Casa das Torres de Oliveira, and it was much too short. If I have one regret on my trip to Portugal, I wished we stayed longer here, to soak in the Douro Valley sun, while drinking more wine. You can book this Douro Valley hotel here.

I wore this Ann Taylor pink linen dress to capture the old-world charm of the location of the hotel. I paired the pink linen dress with a straw hat from H&M (also worn here), mules from Vince Camuto and a round straw bag I bought at a shop in Porto (found an exact copy from Nordstrom here).

The grounds were a gorgeous location, lined with roses, hydrangea bushes and rows of vines. This romantic dress, featuring bow details on the shoulder complimented the atmosphere.

Casa das Torres de Oliveira is about a 1 hour, 20 minute drive from Porto. The drive starts along the highway, and then it goes up, and up and up. Make sure you are a confident driver and not a novice! You will be exploring some jaw-dropping cliffs and vistas as you snake your way up and around the Douro Valley. Casa das Torres de Oliveira is located in Mesão frio, which is a small village. There aren’t many large stores or amenities around, but I personally adored the country atmosphere. Regua is a much larger city with many restaurants, grocery stores and amenities, a mere 15 minute drive from the hotel.

The views at Casa das Torres de Oliveira were stunning. While you can’t see the Douro River below, the hotel was situated very high up with majestic vistas of the vineyards below. We awoke to sounds of church bells on Sunday morning, and could hear roosters crowing as we took pictures around the hotel.

In the evening, the sunset was absolutely gorgeous, and we had the most memorable night, drinking a bottle of Casa das Torres de Oliveira’s wine, Consensual Reserva 2015. We ended up taking two more bottles home! If you stay at Casa das Torres de Oliveira, it’s definitely worth sampling their own wine! While the region is most known for sweet Ports, I prefer more fruity, full-bodied reds.

The rooms at the hotel were spacious, and I really enjoyed the rustic, traditional decor. The beds were extremely comfortable (a relief after being in an Air BnB), and I adored the gold mirrors adorning the walls… a decor idea I’m stealing for my own cottage! It was a very relaxing room.

The grounds of the hotel are very beautiful. Inside the manor, there are living rooms set up of the old family. It was incredibly charming, and I liked seeing maps and photographs of the area. A small continental breakfast was also included. It was really nice to have tea and Nespresso coffee! While I don’t typically eat breakfast, it was a nice feature for this bed and breakfast in the Douro Valley.

One of my favourite parts about Casa das Torres de Oliveira was the stunning, newly-renovated pool. With a view of the gorgeous manor behind, and spectacular scenery of the Douro Valley, it was easy to stay too long by the pool… I still have the sunburn to prove it!

Our stay at Casa das Torres de Oliveira was one of my most memorable visits. I would die to go back in a heartbeat. The hotel was an incredible value, that offered luxury accommodation, in a gorgeous location for a complete steal. Don’t hesitate to book this hotel!