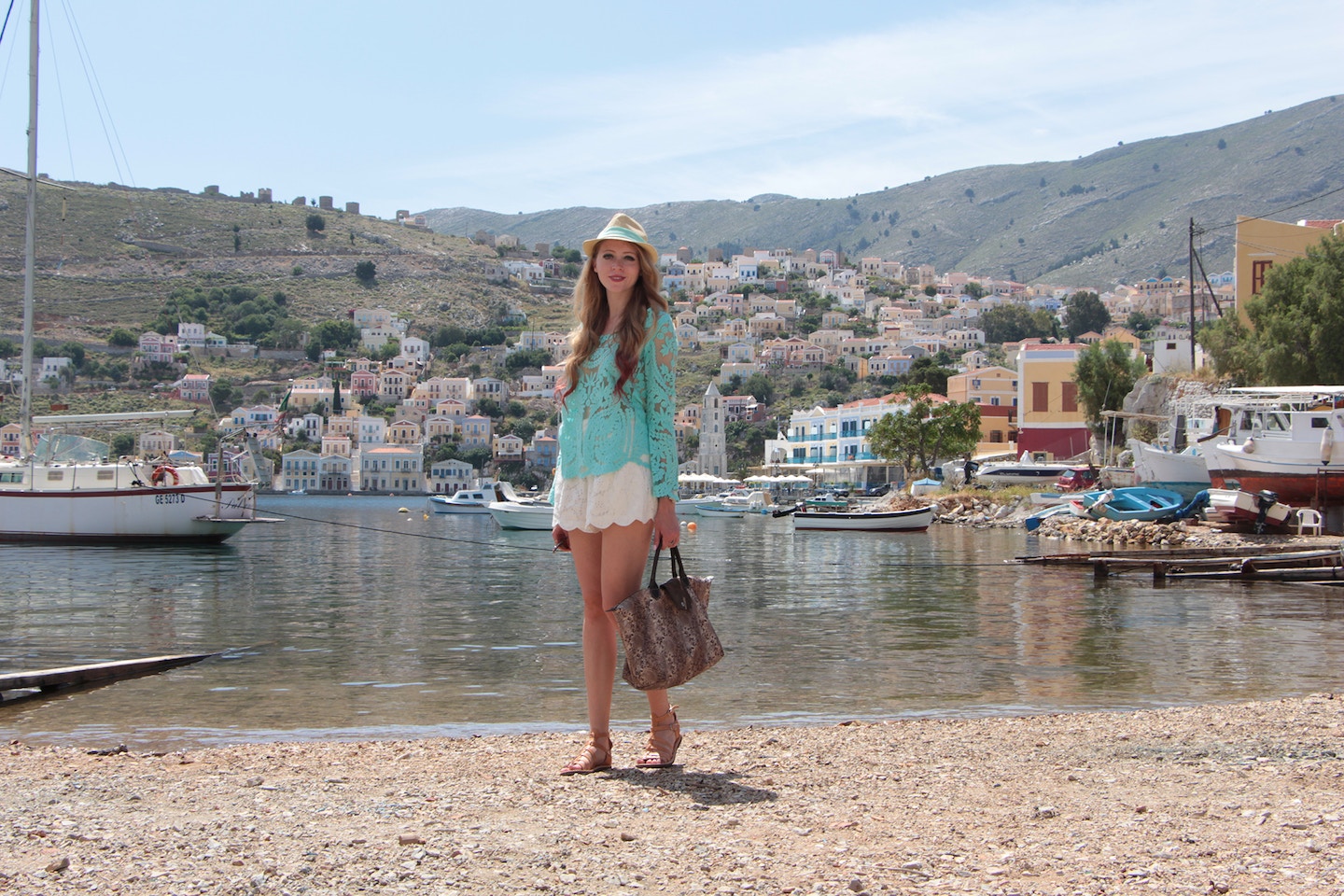 One of the most beautiful and romantic places we visited in Greece was the Dodecanese Island of Symi. Symi Greece is about an hour from Rhodes by ferry, and we came in to Rhodes from Athens by a quick, easy and cheap plane ride with Agean Airlines. When we got off the boat (you can see Turkey in the horizon), I was in awe of the beautiful, Venetian-style houses painted in a handful of pastel shades. The sparkling-clear turquoise water and crisp smell of the waves welcomed us and made the next couple of days magical.

We stayed at the Pedi Beach hotel, a few minutes from town by bus or car, which had a private sandy beach (that was too cold to swim in May, sadly). The hotel was serene, but full of retirees. The staff was helpful and I liked the quiet location but next time, I would rent one of the many apartments in town. Symi isn’t a party town anyways, not that we were ever going to bed by 4 a.m. when there’s so much to see!

From every corner, the town gets more beautiful. Atop the hill is a church that almost looks like it’s made of plasticine There used to be donkeys to take you around the island, but now, cars and scooters have overtaken the small, mountainous island. The town of Symi has a sleepy feel, and that is because after World War 2, a majority of their population moved to Western Europe, America and Australia. At the town’s peak, 25,000 people lived there, and now it’s home to a mere 2,500. It’s almost a shame, because the town is so beautiful. Nowadays, a lot of expats are flocking to Symi to retire. Many of them are British and I noticed a few retirees painting pictures.

There’s a bit of shopping in Symi as well. A duty free shop sits right on the water, and I regret not picking up some home-grown organic dried spices from a quirky stand. The sponge industry is a huge part of Symi history and I picked up a natural sponge from Dino’s Sponge Shop right in town. A good tip is to get a dark-coloured sponge because they are unbleached and will last longer. I wish I had more space in my luggage to bring back makeup and a few loofahs! There were also a few jewelry stores in town, including one where they hand-make a lot of gold and silver pieces. I’m kicking myself over not picking up one silver necklace, I missed out because I forgot everything but the cafes close down from 2-5 p.m.!

I also visited Soroco, a chic and minimalist lifestyle store that’s owned by an Australian expat. She carries a few hard-to-find Aussie beauty brands along with beautiful cotton clothing and chic espadrilles. Again, I wish I had more space to fit some of these treasures!

Symi is known for its seafood, especially Symi Shrimp. We ate at Meraklis, which was recommended to us by the fiance of the owner. She was so helpful and sweet to us when we got off the boat and called our hotel for us to come pick us up. Daniel had Symi shrimp which looked delicious and was a hit with the cats roaming around too. I had a full local fish that was tasty, but a bit small. They invited us into the kitchen to even pick out a fresh fish. The prices were also fair for an island town.

Symi is a great town to relax in. We retraced our steps a couple times and took in the view of the beautiful port. Right by the ferry docks is a red house that is currently under renovations, this is actually an important place because it was where the Germans surrendered. There are pictures of German General Wagner in Symi, which was occupied by the Nazis during the war. Symi has been tossed around many times throughout history, but we can thank the Italian rule for the romantic Venetian-style neoclassical homes that have been lovingly restored by new owners in the past 50 years or so.