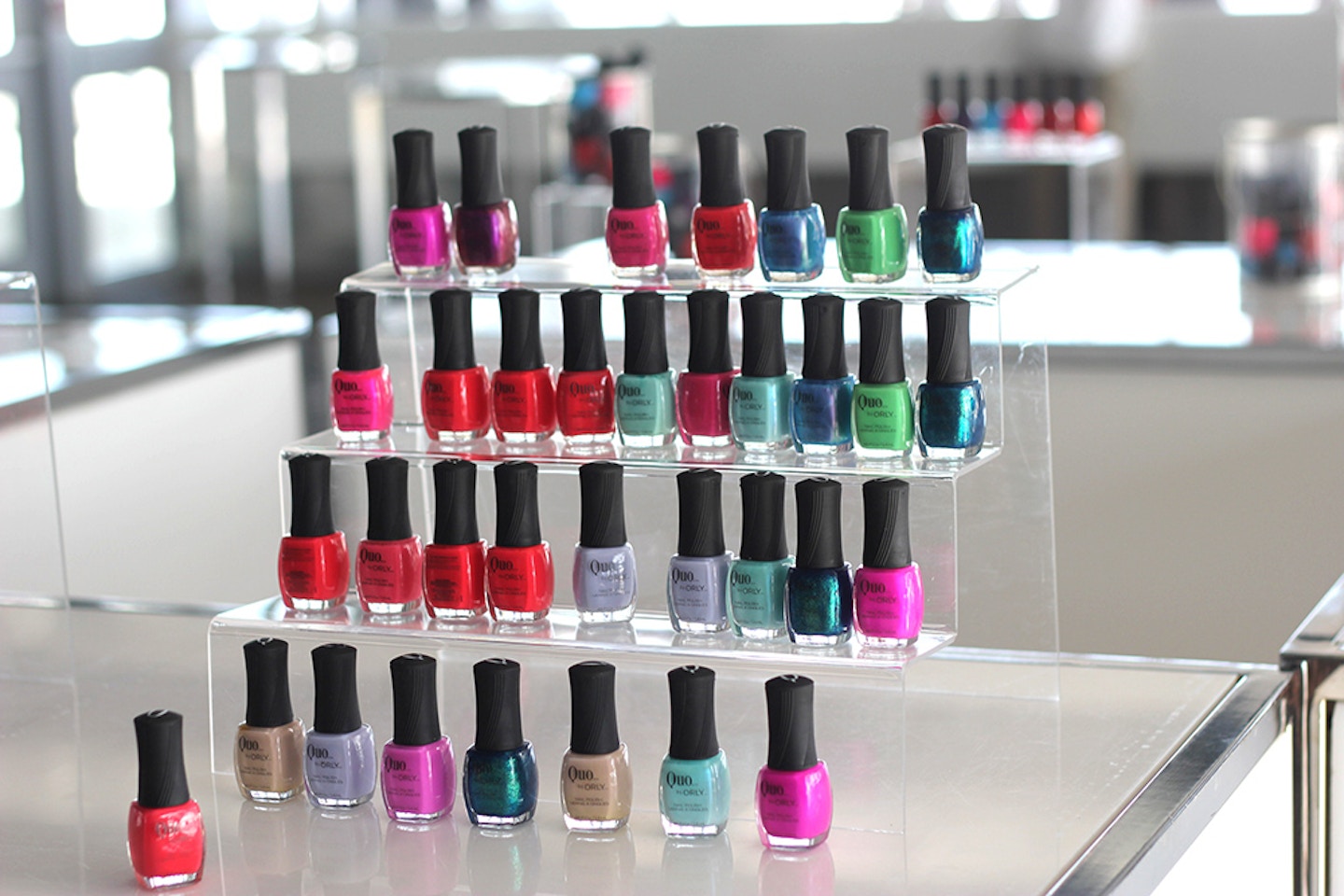 Last week, I attended the Quo by Orly media preview and got a sneak peek at the line’s new offerings for late summer.

Image courtesy of Quo by Orly.

I walked up the stairs and into the glass solarium and immediately wanted to put on my sunglasses, as the reflection of the water filled the room with light. The panoramic views of Lake Ontario and the Toronto skyline were a stunning background for the afternoon. Flowers, drinks and fashionable attendees milled around as they waited in line to get their nails done.

The founder of Orly himself, Jeff Pink was present at the event, and I got to share my nail polish story. (I still own a 15-year-old bottle of Orly nail polish in the most dainty pearlescent coral). Mr. Pink is the creator of the official French Manicure, and has also patented Quo by Orly’s signature rubber grip handles.

Another new innovation to the lineup are the MegaPixel FX polishes. The iridescent nail polish is long-lasting, because there are actual glass particles that give a beautiful sparkle and help the nail polish last longer.

The highlight of the launch was without a doubt, the Smart Gels LED lamp. Some guests got really excited (admittedly thinking they were pink cell phones), but the product is definitely one-of-a-kind in the DIY gel nail market. The lamp is USB powered and small enough to pack into your purse, making it fully portable. You can either hold the lamp freehand (great to reach toes), or press one button, and the stand pops up as well.

Guests at the party could get their lamps personalized by a Pinky’s Nails artist. I couldn’t believe how she managed to capture my handwriting!

To go along with Quo by Orly’s new Smart Gels LED lamp, they have a few new colours coming out soon. I’m coveting the blue and citron colours, as well as some of the iridescent Duo Chrome colours for the holidays (yes, I’m already thinking ahead).

To the event, I wore a floral romper from Zara, comfy strappy wedges and a Rebecca Minkoff Mini Mac bag.

Image courtesy of Quo by Orly.

Also at the event was celebrity nail artist Kimmie Kyees. She’s done everyone’s nails from Rihanna to Katy Perry to Adele, and shared her insider stories and the upcoming trends she loves. During awards season, she might have up to three celebrities at the same event, and while it might seem glamorous to do Rihanna’s nails before the Grammy’s… it’s a lot of running around!

After the presentation, guests could get nail art and test out the new colours. I never have a steady hand, so it was nice to have a nail artist from Pinky’s give my nails an awesome geometric design.

Most of the products mentioned will be available at select Shoppers Drug Mart locations in mid-August 2013.