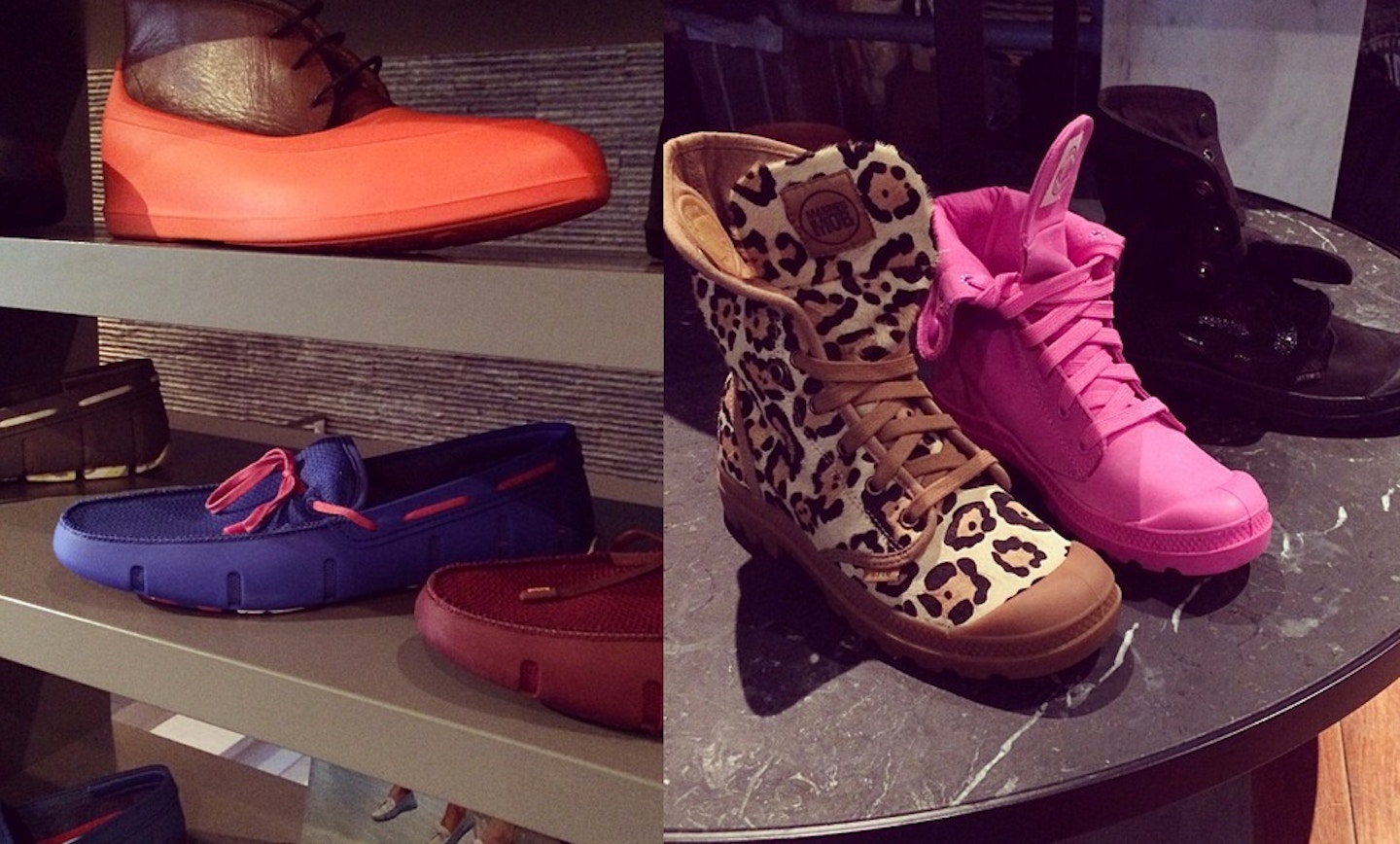 Last week, I checked out both Swims and Palladium’s functional line of footwear for Spring 2014.

Swims is a Norwegian line founded by Johan Ringdal, a Parsons design student. After moving to New York, he would wear a pair of galoshes gifted from his grandfather, but was embarrassed and teased for their style. That led Johan to design a modern galosh that could protect shoes during wet weather, while still looking streamlined.

The brand has expanded to include a line of boating shoes (and now sneakers) featuring breathable mesh and TPU construction. The sole is non-marking and you can easily take out the insole and wash out any sand or dirt collected at the end of a beach day. These are the perfect alternative for a guy who doesn’t like wearing flip flops to the beach. They’re also stylish enough to wear to dinner too. The new collection features prints and trendy colours like oxblood.

The same line of boating shoes also encompasses women, with a range of cute pastels for summer.

I got a sneak preview of Palladium’s Spring 2014 collection as well, and was tempted to wear some of the items right away! The brand was founded in the 1920s but became a shoe brand in the late 1940s following the war. Palladium was orginally an aircraft tire manufacturer and decided to transition into footwear, utilizing the heaps of rubber and canvas left over from the war. The brand outfitted the French Foreign Legion, and their original design, the Pampa boot endures today.

For next season, that classic boot is going back to its roots, featured in vintage stonewashed canvas in classic hues and modern muted pastels. My favourite were the light coral and blue.

The collection also has duochrome looks, which are cute for kids and come in bright colour combos like green and orange.

What really piqued my interest was a light-as-air rain boot. The design is still similar to their classic boot, but features taped seams and a waterproof fabric. I find rain boots can often weigh me down, so these would be a great alternative if you’re walking around all day long.

They also have a new range of ballerina flats and low cut sneakers that transition the brand into the summer months. I fell in love with their designer collaborations, a collaboration with sneaker shop, Atmos and MOB are due this coming Spring. Sadly, this calf hair boot style, designed in conjunction with MOB, won’t be available until Fall 2014.

The preview was a great chance to take a look at functional footwear that is still street style friendly and affordable. Most of Palladium’s line rings in under or around $100, even for all leather (that are also all weather) styles.