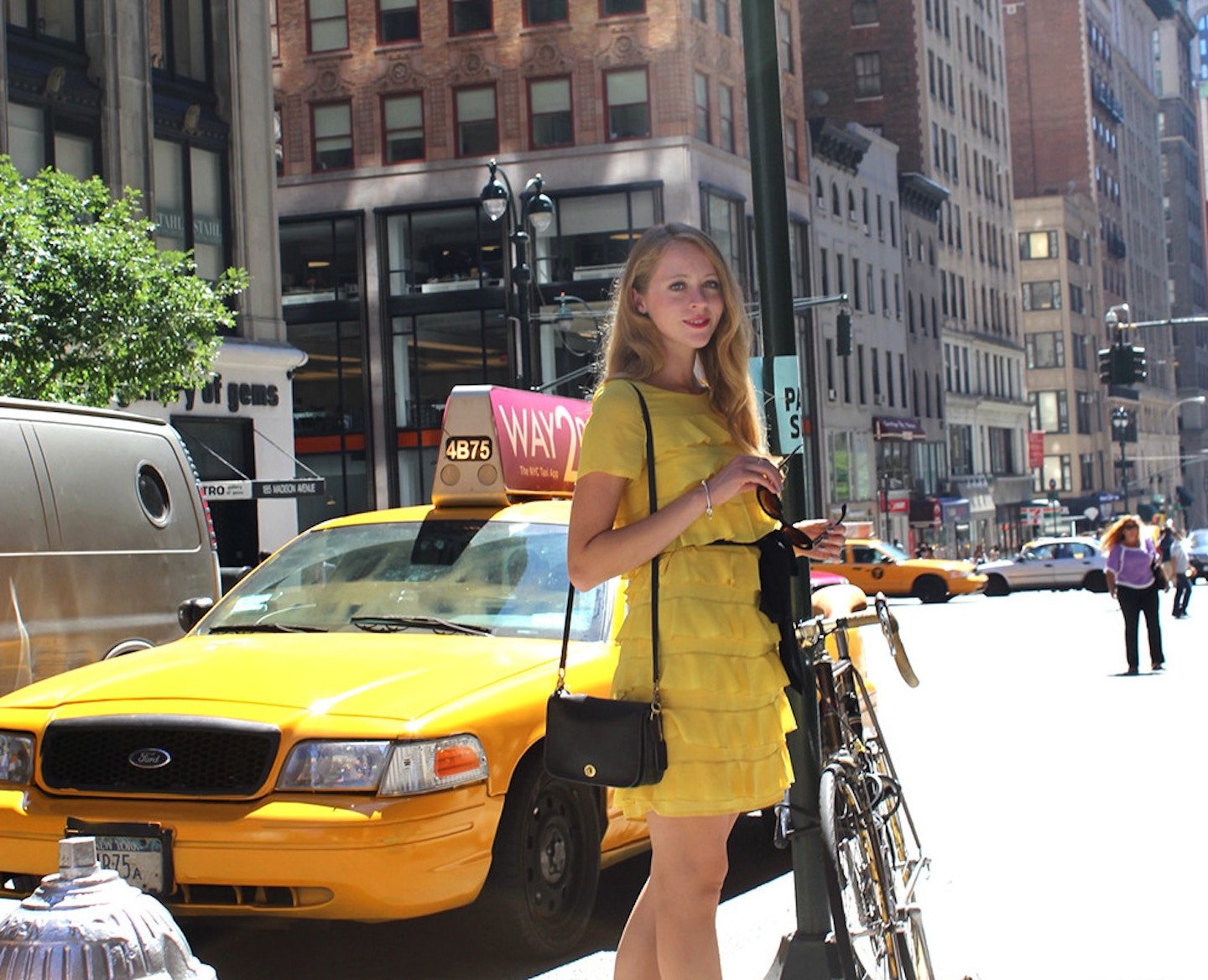 On my first trip to New York, my boyfriend and I had the chance to visit landmarks, museums and squeeze in a lot of shopping. One of my favourites was our visit to the Empire State Building, and thanks to a City Pass, we were able to take in the view not once, but twice at night.

It was windy up on the 86th level of the famous skyscraper, but I wore a fluttery ruffled dress from H&M (similar here) and my classic vintage Coach city bag.

I was inspired by the yellow taxicabs and hunted down a parked taxi to take this picture. (This proved to be a complete scavenger hunt, since NY traffic is always moving). I also accessorized with my Prada sunglasses.

We spent the afternoon in the Flatiron district and enjoyed happy hour and some chocolate-banana gelato from Eataly. The ice cream had a natural flavour but was melting too quick to savour. The cafe was huge and right beside the square, so I’d definitely suggest the coconut gelato which tasted like coconut water.

For dinner, we hit up La Esquina (rumoured to be Leonardo DiCaprio’s favourite NYC taco haunt) at 114 Kenmare, where I had pulled pork tacos and my boyfriend had the enchiladas. The frozen margaritas were delicious and ample in size, however I wish I had ordered a larger meal. Two tacos just isn’t enough after a long day of running around in the city! I loved the radish garnish and tender pork, but next time I might opt out of the cafe menu and go downstairs for La Esquina’s full experience.

Dinner wouldn’t be complete without dessert, so we walked around the corner from La Esquina to Babycakes NYC, an adorable vegan and gluten-free bakeshop located at 248 Broome Street. Pictures weren’t allowed inside, but we picked up mocha-chocolate and pumpkin cinnamon cupcakes. The mocha chocolate was divine and moist, but the mocha gave it a bit of kick. These cupcakes were so rich, you wouldn’t even know they’re gluten free. I fell in love with this cupcake shop at their Downtown Disney outpost, and the original location is even better, especially with the friendly service and cute pink shop in the charming East Village.

Ever wonder if 1 and 1 exist in NY. You might remember a funny scene from Seinfeld where Kramer gets lost downtown after visiting a girlfriend. Well, my boyfriend and I traveled to the infamous intersection, and there, we discovered the “nexus of the universe”. We didn’t make it up to Tom’s Restaurant, but we were glad to sneak in this Seinfeld reference.

After stuffing our faces and walking around all day, we headed back up to midtown to see the view from the Empire State Building at night. We were definitely lucky to take in this view on a cloud-free night. With the Chrysler Building alight and all of NY midtown bathed in a twinkly glow, it was a romantic end to our day.