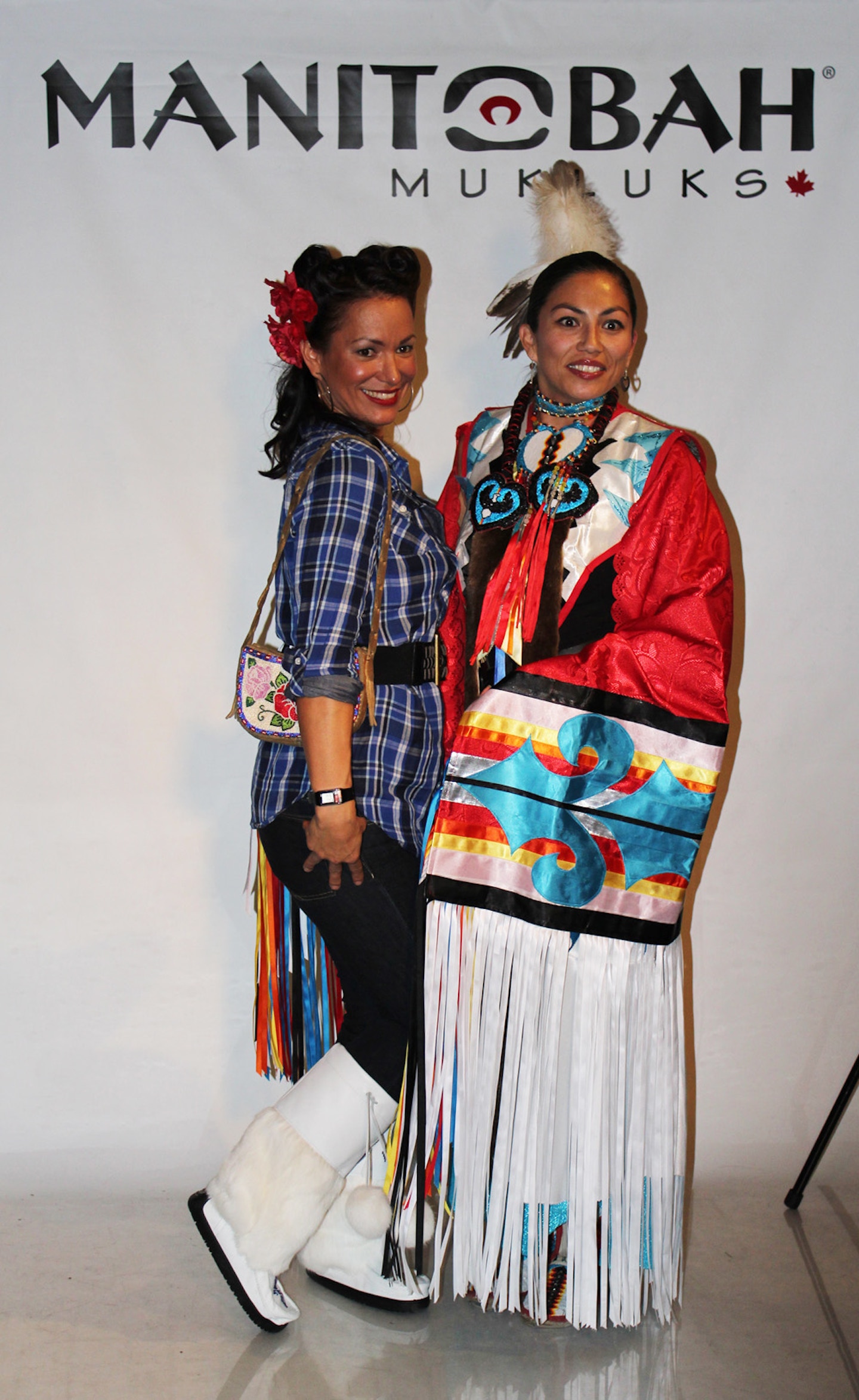 Last week at the Bata Shoe Museum, guests and the media got a taste of tradition. From authentic Aboriginal food to modernized authentic footwear. The pow wow celebrated Manitobah Mukluks, a Canadian footwear company made in Canada by First Nations people.

The event was hosted by Waneek Horn-Miller, a Canadian Olympian and Mohawk. With her hair done up in victory rolls and a pair of pristine white mukluks on her feet, Horn-Miller showed the crowd a taste of Aboriginal culture.

The audience got to witness a breathtaking and colourful dance performance while snacking on bison skewers and sipping Canadian-themed maple and cranberry flavoured cocktails.

While it was only a mere snippet of Aboriginal culture, the authentic entertainment juxtaposed against a modern setting complimented what the brand is about.

Manitobah Mukluks are made in Canada and fuse traditional designs with modern manufacturing techniques. ” We’re staying true to our history and enjoying all the inspiration from the past, our ancestors, and melding it with the present.”says Sean McCormick, the president of Manitobah Mukluks.

While boots from the contemporary collection take about an hour to make, more than 25 hours go into creating one-of-a-kind story boots. The Storyboot Project is an initiative created by the company in hopes of preserving the ancient artform of mukluk making. From the stitches, to the sole, down to the last bead, each boot is created by hand. “They’re really individual works of art. And that art is actually dying out, so what we’re trying to do is work with them and make it economically viable for them to continue to practice their traditional arts,” says McCormick. He adds that it often costs the artist more money to make a pair of mukluks than what they would earn. However, Manitobah Mukluks is splitting the profit 50/50 with the artist directly. So buying a pair from the Storyboot Project helps to support not only the artist, but to keep the practice alive.

The company also aims to create outlets for economic activity on the reserves, especially the areas that are still connected to traditional arts.

The traditional dancers performed throughout the evening, and A Tribe Called Red provided the soundtrack for the evening, until they brought out a birthday cake for Horn-Miller—in the shape of a pair of mukluks!

Guests also got to show off their new mukluks in the Photostar photobooth, which was a hit!  I snapped a few as well.  I think Versace for H&M and mukluks + fur is a great combo!

I also bumped into JayStrut, who was wearing the Proenza Schouler PS11 bag I’ve been obsessing over!

Brittanny and Maleah Sparks were also there, donning matching fur hats for the occasion.

Horn-Miller says, “They’re taking one of the oldest, traditional practices of mukluk making, which is how we survive the winters in Canada. And they’re taking it with a new contemporary twist, and they’re promoting how beautiful Aboriginal culture is.”

Here’s a look that was inspired by Manitobah Mukluk’s take on tradition.  Featuring my own winter style; a nordic fair isle printed skirt, a mohair sweater from Newfoundland and a black rabbit fur hat, which matches perfectly with my black Manitobah Mukluks!