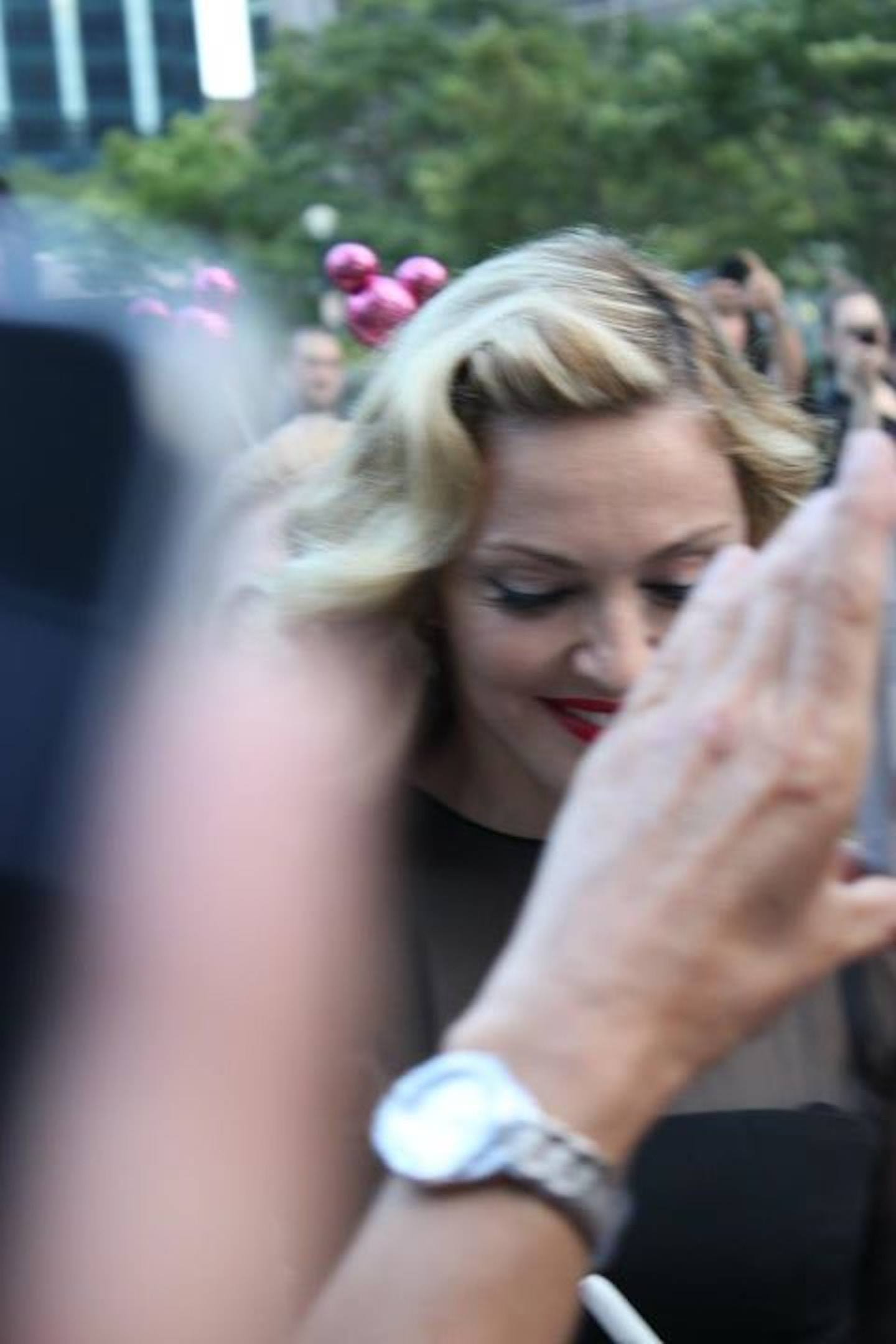 Last evening, Madonna and the stars of her latest directorial effort, W.E. graced the red carpet at TIFF.  Madonna is my idol and I couldn’t believe I was only a couple feet away from the megastar and businesswoman.

Yes… I was that close. There was only one woman in front of me, and I was in complete shock that Madonna came right up to our little area along the gates.  The best part of the experience?  A woman told Madonna that she’s an inspiration, and Madonna smiled.  I will tell my children about the day I saw Madonna smile!

While it was hard to get a clear shot with a one row of crazed fans in front of me, I took the time to look at her and the way she reacted to her fans.  While she may be labelled as a diva, she took her time and signed a few autographs, with a smile.

The media went nuts for Madonna, probably the most widely-recognized celebrity at this year’s film fest… and what an amazing body!

She wore a body hugging black dress with sheer sleeves by Tom Ford and killer satin kicks by Brian Atwood. I’m happy to say I in fact own a similar dress and I will definitely be emulating her look sometime soon. The cutest part about her outfit?  She wore a rhinestone necklace with the initials W.E., an amazing way to support her project!

Needless to say, I was completely starstruck.  Madonna has always been my idol, and I grew up dancing around to her music.  We share that “Blonde Ambition” and I can only admire her perseverance in an industry that moves onto the next thing so fast.

And speaking of the next thing… up and coming actress Abbie Cornish who starred in W.E. was on the red carpet as well.  Decked out in a beautiful champagne coloured gown by Elie Saab, she looked like a silver screen star.

I liked her simple makeup as well… but getting this close, you really see how much foundation they wear to look “flawless” in photographs.

I couldn’t get over Andrea Riseborough’s sassy little number.  The mermaid green sequin dress by Dolce & Gabbana commanded attention on the red carpet, hey, she has to compete with her Madgesty after all!  Her Christian Louboutin black platforms were a safe pick, but didn’t compete with this show-stopping dress.

Today, I’m seeing a showing of W.E., and I’m hoping Madonna will make another appearance as the director to introduce her film… rumour has it that there was no afterparty for her, because she flew out last night and JFK kept their airport open for her private jet to land.  I must have jinxed myself by carrying around my DSLR today.  Critics have been panning her directorial efforts, but I can’t wait to see for myself.  Look out for a review sometime tonight!