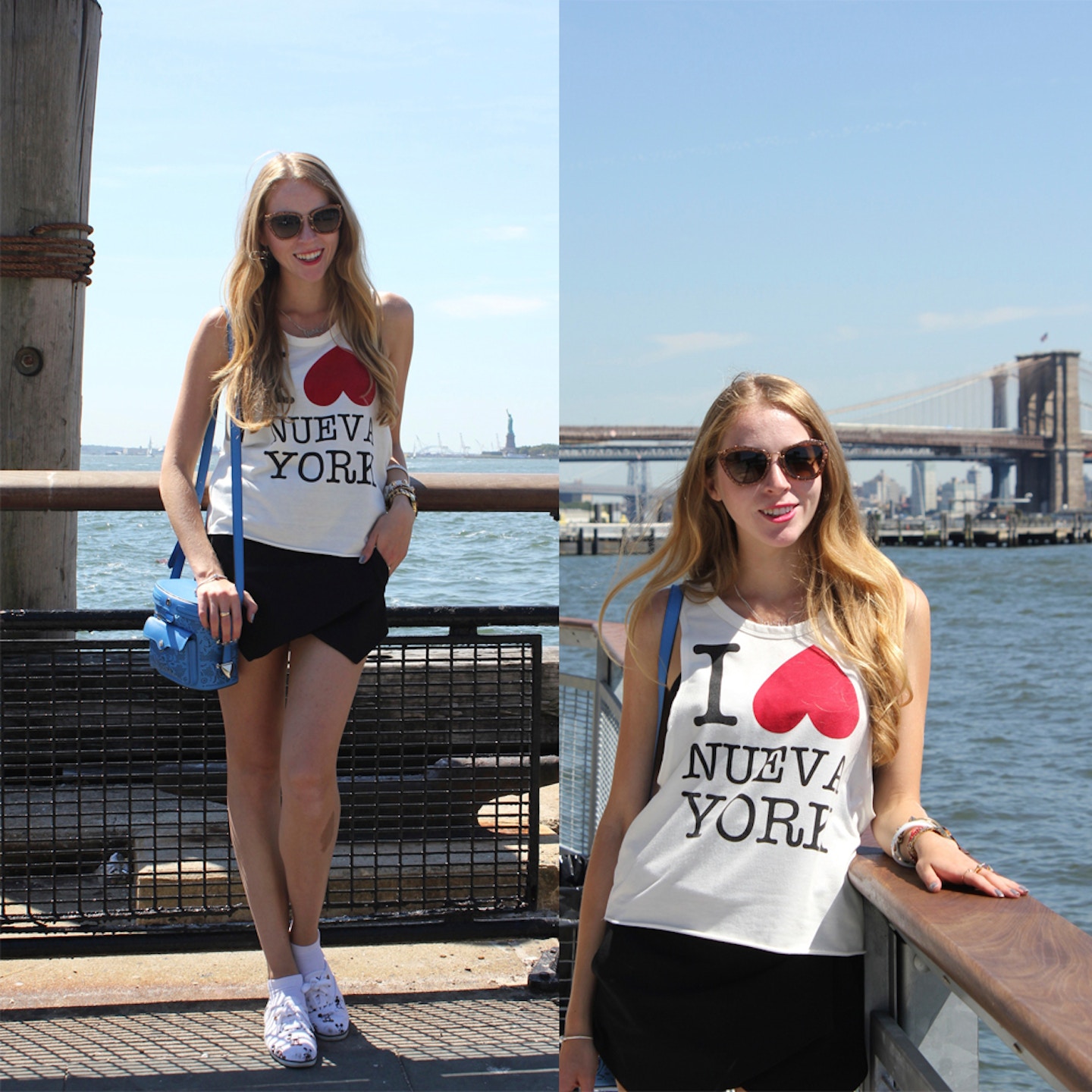 On my last day in NY, we managed to sneak in a lot of sights. From visiting the 9/11 memorial to taking a cruise to the Statue of Liberty, it was an amazing day to end our trip.

We started off in the Financial District to see the 9/11 memorial. We didn’t reserve tickets, but managed to get there before 10:00 a.m. so that we could reserve an early 10:30 a.m. entry time. It was busy, but the line was always moving so it didn’t feel that long of a wait. While we were waiting to get in, we snapped some pictures of the new construction at the World Trade Centre, the Freedom Tower, as people affectionately call it.

One sight I didn’t expect to see was a little old church and cemetery that survived the 9/11 attacks. It was quaint and serene amidst the crowds and construction.

Once we were in, I was in awe of the beautiful tribute to the lives lost on that tragic day. I was only about 10 years old at the time, but it’s still a fresh memory. Two pools representing the North and South tower have waterfalls that cascade inwards. The effect was stunning and poetic and many people stopped to touch names along the rails. I saw one woman reflecting for a while and then she kissed a name, which stood out amongst the selfie takers and tourists circling the memorial.

White roses adorn the names of victims when it’s their birthday. I only saw a couple of roses on that day.The memorial is free to visit, but a donation is suggested. Next spring, a museum will open as well. I peered in and saw original steel beams from the site and photographs.

After visiting the memorial, we went on a walk through Wall Street. It was Saturday, so it felt like an abandoned movie set. I can only imagine it would be different on a week day, but the empty streets felt eerie and cold, but it was a lot easier to take pictures that way. We stopped (and waited for over half an hour) to take pictures of the Bronze Bull, before heading off to Battery Park.

I didn’t get to Brooklyn Bridge itself, but I got some pictures with it in the distance. We were right in front of a NYC Helicopter company, and it was cool watching them buzz in and out of the helipad along the East River.

Battery Park was a beautiful way to spend some time before our boat cruise. With greenery and a pretty boardwalk view of the Statue of Liberty, it was a nice walk.

I’m wearing an I Heart Nueva York Shirt (a la 3.1 Phillip Lim) from Necessary Clothing. I paired it with black asymmetrical culottes from Zara (similar here), my Mickey Mouse Keds sneakers and my new Miu Miu glitter sunglasses I picked up at Century 21 for the steal of the century! (Pun intended)

We even stopped for a few minutes to get our charicature done… the outcome of which I’m too embarassed to post online!

After that, we zipped up to 43rd street on an epic subway ride (not to self, always always bring small bills) only to miss our boat. Luckily they had a shorter boat ride an hour later which would take us to see Lady Liberty. In the meantime we snapped some photos, including this one with a NYC firefighter.

The boat cruise was an hour and a half long, and we got to see all of the NYC skyline, the financial district, Ellis Island and the Statue of Liberty. It was hot and under a scorching sun, it was the perfect afternoon for a boat ride.

I was sad to leave the beautiful city when I had such a perfect day, but I know I’ll be back soon.