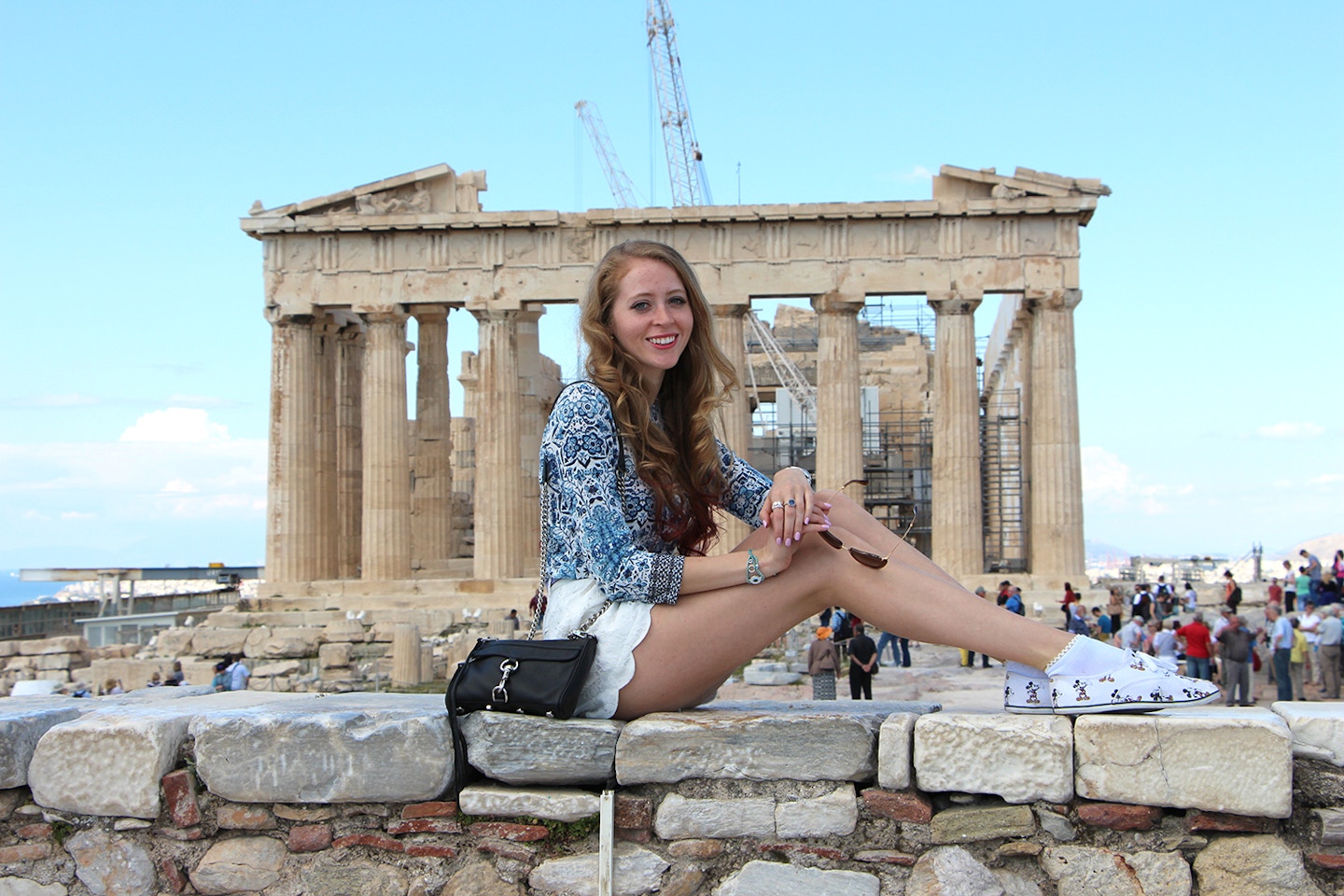 On my first day in Athens, visiting the Acropolis was a must-see. There are so many attractions in the ancient and modern city, but the Parthenon was at the top of the list of landmarks, and an opportunity to dive into learning about Hellenic culture. It was a cooler day (luckily the coolest day of our two week trip), so I opted for a longsleeve cotton shirt, shorts and sneakers to be comfy while climbing the hill and steps up to the Parthenon.

We started at the bottom, where you can take in remnants of votive offerings and the beautiful Theatre of Dionysus, which is in the process of being restored. I walked around the seats, imagining the grand orators and dramas that unfolded here over the years. As a drama student, it felt incredible to visit the birthplace of theatre and take in the setting.

Up on the south hill, is a beautiful panoramic view of the city. It’s worth taking your time to visit the ruins and appreciate the views.

After entering through the Propylaea, you are immediately in front of the commanding Parthenon. I saw it the night before from afar, but once you see it up close, the large scale of the temple is commanding and awesome. I was pleasantly surprised to see restoration teams hard at work, restoring the structure and doing preventative construction. An accidental gunpowder explosion took out the majority of one wall, but they are piecing bits together. Another story that fascinated me was how in 1799-1803, Lord Elgin, an English ambassador to the Ottoman Empire came with a crew and removed many of the pediment sculptures adorning the Parthenon. He actually had a permit to do this, which is ridiculous when you consider that this was a large-scale act of looting and vandalism. You can view these sculptures in the British Museum in London, however many (including myself) believe they should be rightfully returned to Greece. Afterwards, I visited the new Acropolis Museum which is a must-see to get a sense of Hellenic sculptural art and the history of the Acropolis of Athens. You aren’t allowed to take any pictures inside, so that is why they aren’t included in this post.

The Erechtheum is another monumental structure, and I loved the sculpture of the Porch of the Caryatids. The originals are in the Acropolis Museum (as well as one Caryatid stolen by Elgin in the British Museum), the sculptures installed in the temple are replicas to preserve the originals.

I loved seeing the sweet stray dogs and cats that laid down in the sun. Unfazed by hundreds of passersby, they were kind of like guards for the monument.

Always the perfect photo opp at any angle, I was happy to get a picture snapped with my boyfriend!

After spending some time on the top of the Acropolis, we circled around the perimeter and saw the caves that served as temples to Pan, Zeus and Apollo, which you could walk around in. We were the only people on the North slope, and it’s a worthwhile stroll down to see the massive caves and get a sense for the height on the hill.

As part of the admission ticket, you could also visit several other sites nearby. After lunch, we walked to the Temple of Zeus and Hadrian’s Arch. Not many of the Corinthian columns stand, but the site is very serene and not very busy.

To end our day, we picked up some Cappuccino Freddos (more on that later), and walked through the National Garden, which is adjacent to the Temple of Zeus. The park contains beautiful roses and established landscaping, but I’d love to come back to see the Wisteria in bloom (they have arches everywhere).

It was a lot of walking for our first day (still a bit sleepy after a ten hour flight), but we covered a lot of ground and were immersed in Hellenic history and culture, which set the tone for the rest of our trip.