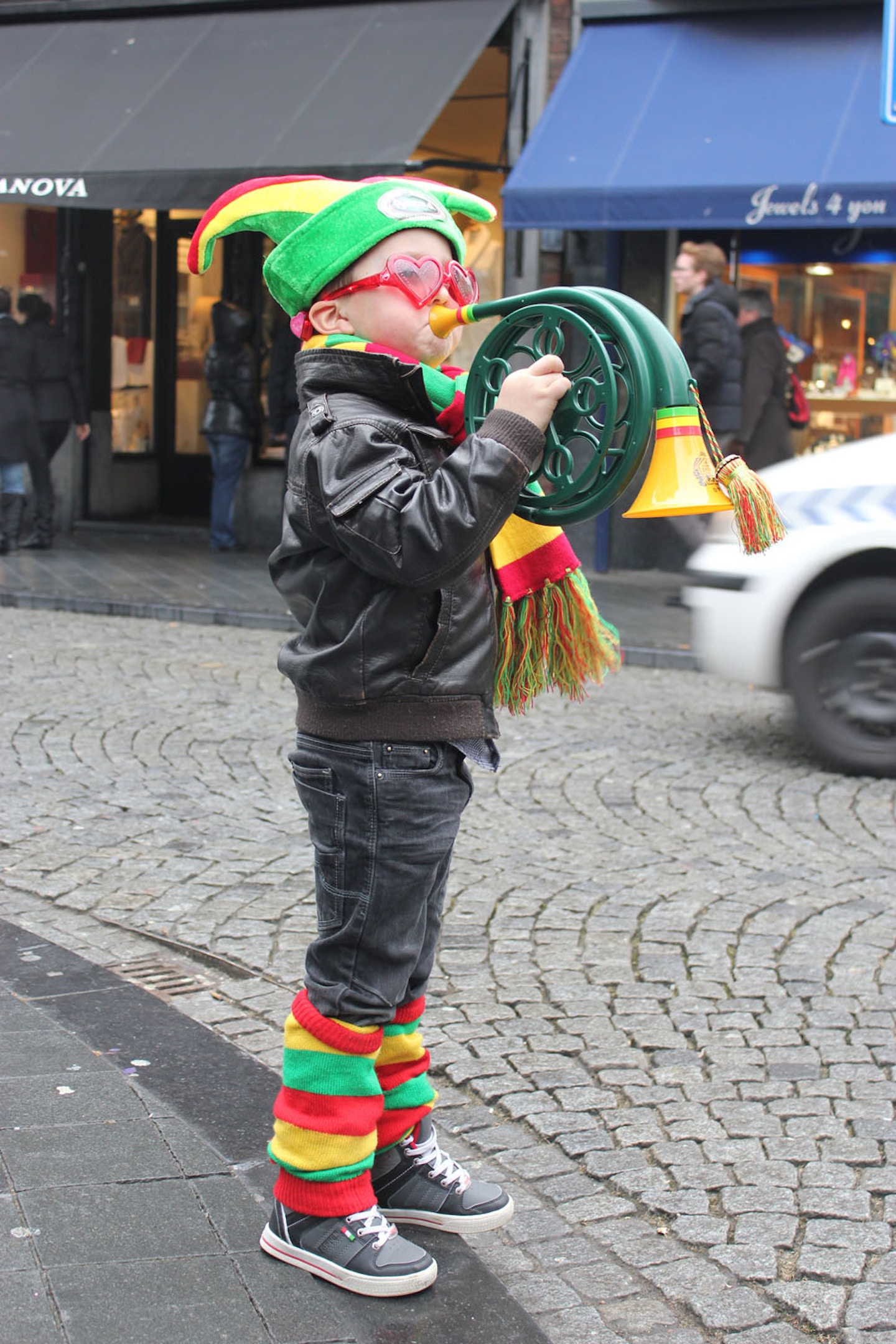 This weekend, cities around the world are celebrating Carnaval. From New Orleans to Rio to Venice, people drink and dance in the streets and celebrate before lent begins on Tuesday. Last year, I went to a Carnaval celebration in Europe, and no, it wasn’t Venice. In a tiny Dutch city in the most southern province of Limburg, Maastricht plays host to a huge parade and street party. Red, yellow and green-coloured boas, balloons, flags and floats flanked the streets as people came out in the cold Dutch rain to sing and drink beer.

I was in Maastricht for a couple of days and got a taste of their folk music, well more than a taste. For 24 hours, I couldn’t get the oompah-pah songs out of my head. On the night before the big parade, we hit the bars in the centre of Maastricht, a 20-minute walk from our cool boutique hotel, Designhotel Maastricht, and witnessed what I like to call Dutch Halloween.

Young people get all dressed up in all sorts of costumes, in what looked like a similar scene in North America in the end of October. The only difference is that the Dutch take Carnaval seriously, and go all out with their costumes… as for the ladies, there are no slutty maids or sexy kitties. They are decked out in real tiger suits, complete with mascot heads, or fireman gear that looks like they could actually put out a fire – nary a garter belt in sight. It was refreshing and fun to see all the creative ideas people had. The bars were full of people, pushing their way to get a cheap brew or hopping along to the music (the hop and the shuffle to the side are signature Dutch dance moves). I couldn’t believe that young university students were dancing and getting crazy to what sounded to me like the polka music. It was special to see how everyone embraces their Limburg heritage… even the music.

The next day, we watched the parade. Filled with marching bands and immense floats, spectators decked out in costumes and green, yellow and red watched on in the rain. The rain might have dampened my spirits a bit, but still, people were cheering and having fun. While it wasn’t as crazy and X-rated as Mardi Gras, it was a special experience that I will never forget.

If you have a chance to visit Holland in February or are missing Queen’s Day, Carnaval is a great way to experience some Dutch party culture and see a beautiful part of the country. Close to Brussels and about two hours away from Amsterdam, Maastricht is a beautiful Medieval city with Roman roots, and has many sights to see. From its basilica and its oxblood-coloured church, the town has traditional Dutch food restaurants and high-end shopping, including Hermes and de Bijenkorf. Exiting the train station and heading towards my hotel, there was a flea market, and I even picked up a vintage pearl collar necklace. Fur coats and costumes could also be snatched up at this pop-up tent. Maastricht University is a host to a huge number of international and Erasmus students, so the nightlife is bustling as well.

One of my most memorable experiences of Maastricht was touring the old limestone mine, known as the Grotten Noord Zonneberg St. Pietersberg Caves. These are some of the oldest quarries in Europe, dating back to the Romans, and produced the limestone that built many buildings in the area. It was a led by an excellent tour guide, and was truly unforgettable. The caves were lined with charcoal art and signatures of many famous visitors, including Napoleon.

The mines were intended to be used as shelter, most recently in World War II. There were stoves, a bakery and washing facilities installed within the quarry, but was never used during the war. At one point, the tour guide left us (after asking permission of course) to let us experience total darkness. I never knew what darkness was until I experienced it in the mine, even my boyfriend who works in a mine can agree. Thankfully, the tour guide returned after a couple minutes, which is a good thing, because he explained that we probably would have gotten disoriented and fallen over in a few minutes.

The pony-tailed guide was extremely knowledgeable about the process in which the mine was built, and could even answer all of my boyfriend’s technical questions. The tour is usually led in Dutch and English, but since the group was mostly comprised of English-speaking tourists, he had no problem leading the tour in English. I highly recommend visiting the caves for a unique experience! Included with the tour was also a boat ferry to the site, which had a multilingual (Dutch, English and German) audio guide to Maastricht’s history along the water front of the River Maas. Get it? Maas- tricht.

After two fun days in this city, we were on our way to explore Brussels, which was only an hour-long train ride and a welcome add-on to our Carnaval experience. I wish I had more time (and freedom to walk around without inebriated crowds), to explore more of the city and visit some of the galleries, but I would definitely peg this town as the perfect day trip if you are staying in Liege, Brussels or even if you’re in Holland.

Now to listen to some Andre Rieu (Maastricht’s pride and joy) and celebrate Carnaval!