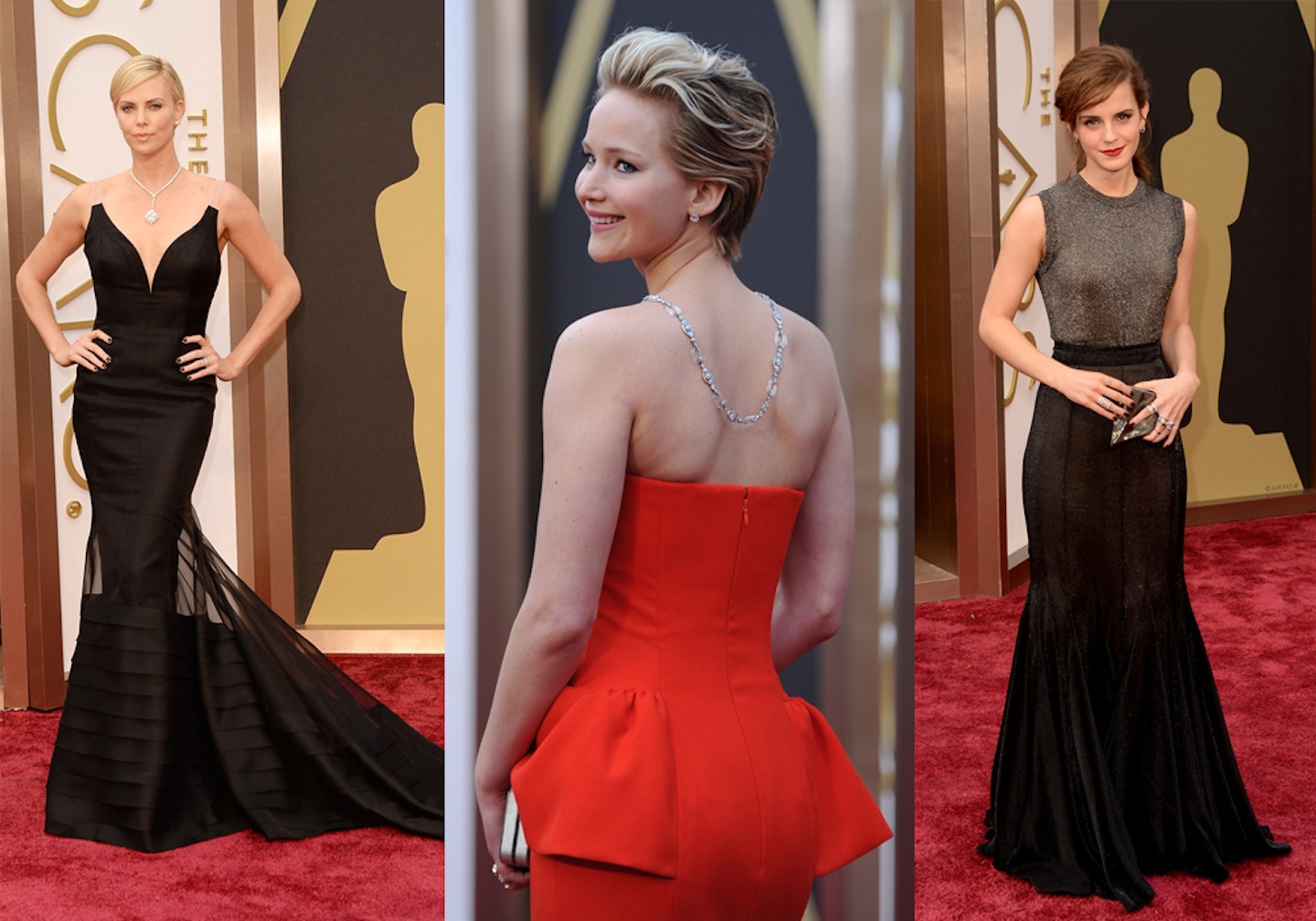 Last night, the stars arrived on the red carpet for the 2014 Academy Awards. While the show was light-hearted with Ellen’s selfies and pizza party, the fashion was light-hearted as well. Shades of blue and blush took centre stage, and everyone played it safe. Nothing really stood out as a clear winner, and nothing was truly horrible either. While I like blush embellished gowns, it was getting a little bit boring when nearly everyone showed up in a dress within the white to peach spectrum. I was just waiting for a phoenix in bright red to emerge, and instead we got Jennifer Lawrence in a half-baked Dior look, with fried hair and yet another backwards necklace. Oscars fashion was a major let down for me this year, but here are my picks for the best and worst dressed stars at the 2014 Oscars.

5. Kate Hudson in Versace. This might be my controversial pick for my best-dressed list, but I love that a star took a risk with an unconventional silhouette. The cape was creative and I love the way the fabric gathered into her waist. She kept accessories simple with a matching satin clutch and elegant diamonds. This dress has a beautiful flowing skirt and while the shoulders look a little 1980s, it was a welcome change of pace and stood out in my mind from other dresses that night.

4. Charlize Theron in Dior. This gravity defying dress was a mystery to me until I saw her present on stage, revealing the clear straps. The mermaid silhouette was elegant and her short hair looked immaculate (J. Law take note), but nothing mattered because she was wearing a jaw-dropping, massive Harry Winston diamond on her neck.

3. Emma Watson in Vera Wang. Hermione wore a muscle tee to the red carpet and looked fabulous. Alright, it was a Vera Wang dazzling gown, but it looked incredibly fresh and edgy. The silhouette was cool and the fabric had the perfect amount of sparkle, but I also fell in love with the way she layered rings on the red carpet. It’s a trend we see in real life, on real girls, and I love that she stayed youthful and relatable instead of wearing a blah typical Hollywood ensemble.

2. Lupita Nyong’o in Prada. This custom pleated Prada confection was inspired by champagne fizz and looks reminded me of vintage Halston. I love the striking light turquoise colour of the gown, the name, Nairobi Blue will likely be the new buzzword (I’m already betting on it being Pantone’s Color of the Year 2015). Shades of baby blue were all over the Fall 2014 runways, so Lupita was definitely on point. The only thing that’s stopping this dress from being my best-dressed pick are the accordion pleats. It’s a bit too 1970s for me and it’s a detail that’s been played out a lot these past few seasons. It was light and ethereal, but the pleats dated it a bit for me.

1. Cate Blanchett in Armani Prive. This gown looks like a winner, and when Blanchett scooped up her Best Actress Oscar for her role in Blue Jasmine, she looked like she deserved it. This was a blush dress done right. Her dress was heavy and encrusted with stunning crystals that caught the light and her opalescent earrings were mesmerizing during her acceptance speech.

5. Anna Kendrick in J Mendel. This dress had potential but there was too much going on. From the high leg slit (channeling Angelina, I assume), to the bare bejewelled midriff, sheer panels and one-shouldered gathered fabric, it was overwhelming on her tiny frame.

4. Liza Minelli. The cobalt blue pants and shirt looked too shiny and ill-fitting, although, I will give her some credit for her playful streak of blue in her hair.

3. Anne Hathaway in Gucci. My eyes! So many sparkles! Hathaway failed the Oscar red carpet once again, this time in a sparkly breast plate. I don’t know why she loves this halter silhouette so much, it is not working for her. I think she looks better from behind though.

2. Julie Delpy in Jenny Packham. Maybe it’s her posture, or her fair skin tone, but this dress is not flattering in any way. The batwing sleeves are giving her a wider shape (her arms on her hips are not helping) and the diagonal lines of sequins move outward, widening her hips as well. The pale colour completely washes her out, and the orange lipstick is way too mod for a ghostly dress like this. Her hair also looks like she did it herself, and a lack of accessories makes this look like she didn’t have a stylist and picked it off the rack.

1. Lady Gaga in Versace. This dress was without a doubt, the worst at the Oscars. I know it’s Gaga, but she is trying way too hard. The shapes remind me of a carpet pattern at a dated 1990s hotel, and the scarf only takes this to another level of absurd. I then looked down to the bottom of her dress and realize she is wearing six inch platform shoes, like as if she’s an escaped circus artist at the Oscars. This look is ridiculous and so overdone. I get that she’s trying to be glamorous, but the backwards sash looks like she’s being choked. I almost wish someone had stepped on it and made her fall off her massive hoof shoes.