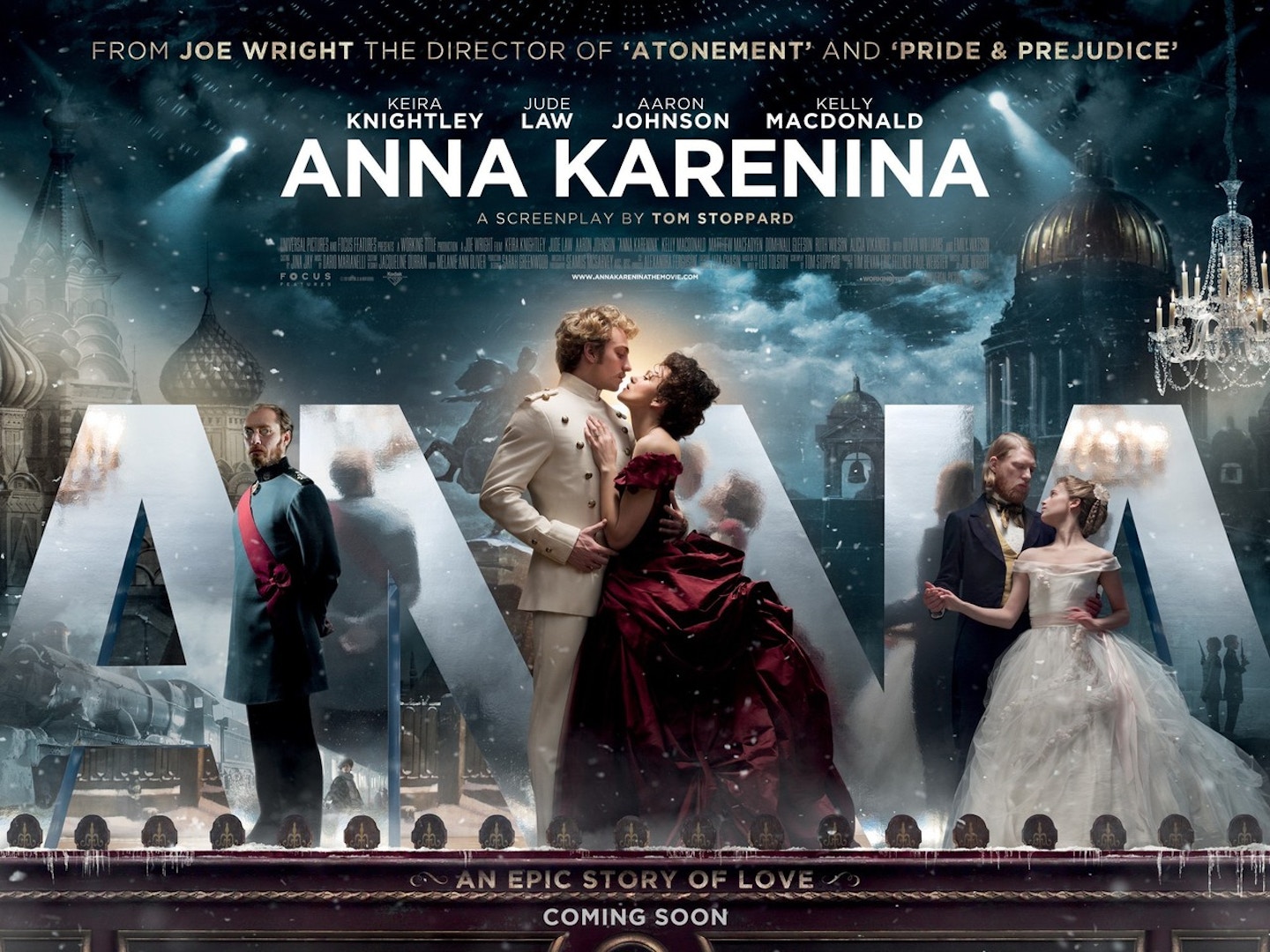 Anna Karenina is a story that’s been told many times before. Leo Tolstoy’s  Russian romance has been translated into many different languages, and translated onto the big screen with many leading ladies in the title role, including Vivien Leigh and Greta Garbo. The latest incarnation, directed by Joe Wright and starring Keira Knightley as the love-torn leading lady and Jude Law as the cuckholded husband, Alexei. The newest version of Tolstoy’s classic stands out for its dramatic performances, creative staging, and opulent cinematography.

The film premiered in London last week, but I caught the film at its premiere at the Visa Screening Room (Elgin Theatre) at the Toronto International Film Festival. The film itself was staged wholly in a theatre. Scenes and environments change throughout, with artificial backdrops and stage props creating Anna’s world in 19th Century Imperial Russia. The effect is staggering and difficult to get used to, but viewing this film in the Elgin Theatre only augmented the experience. From the first scene, the audience saw the stage, which eerily resembled the Elgin Theatre. The staging is claustrophobic, creating a bubble in which Anna and Russian high society live in.

Anna Karenina presents a moral question and illustrates how even today, society still ostracizes the adultress (case in point: Kristen Stewart). Anna is isolated by Saint Petersberg society, and even with modern attitudes, the viewer can’t help but hate Anna’s selfish decisions. Knightley has said “She is the heroine and the anti-heroine. She is the perfect narcissist. She hates herself and she loves herself.” And as a viewer, we feel the same way about the title character.

The screenplay was written by Sir Tom Stoppard, who stays true to Tolstoy’s novel, but one point that should have been addressed were the pronunciations of names. While it’s a fact that Russian aristocracy talked in English with British accents, there’s no doubt that Anna Karenina would mispronounce Seryozha (Sergei). These little flubs may go unnoticed, but not for this Russian viewer.

The most stunning scene in the film was the ball in which Anna dances with Trovsky in a fate-sealing scene. The choreography by Sidi Larbi Cherkaoui was an enchanting mix of waltz and contemporary ballet. As a dancer, I was impressed by the way the actors brought the decadence of a Russian ball to life, while injecting a more modern influence. I loved the way dancers froze in a still frame as Vronsky and Karenina danced past. As if frozen in time by the power of the adultering couple’s lust.

The fashion in this scene was visually stunning. Outfitted in ballgowns created by costume designer Jacqueline Durran. Tolstoy’s novel went into great detail describing the opulent dressing of Russia’s court, but Durran was free to interpret Anna’s dresses. The St. Petersburg ladies are often dressed in opulent pastel waistcoats, wigs and hats, while Anna is bathed in restrained but rich waistcoats, furs, tulle and dramatic hats. Durran told the National Post: “What the director wanted was just to clean down the lines of the 1870s,” she continued, “so that you get left really with a silhouette. He wanted to kind of play with each character having a slightly different silhouette, so that was really the motivation for it.” With Chanel’s brand ambassador in the title role, Knightley even wears a gorgeous strand of diamonds by Chanel Joallerie. This is certainly the fashion film of this year, and I can see many women emulating the style with rich fur trims and fur hats when the film will be released this winter.

Certainly the most stunning part of the movie are the theatrical performances. Jude Law is compelling as the cuckholded husband, Alexei Karenin. Keira Knightley is enchanting and frustrating to watch as Anna, but truly embodies the character, save for a few too many over-dramatic close-ups of her stunning face. Supporting actors Olivia Williams (Countess Vronskaya), Alicia Vikander (Kitty) and Ruth Wilson as Princess Betsey all provide comic relief and a perfect female foil to Anna’s character. Aaron Taylor-Johnson as Count Vronsky is sympathetic character, though he was outshined by Domhnall Gleeson as a compassionate Konstantin Levin, the hardworking farmer in love with Kitty.

Above all, Anna Karenina is a cinematic royal jewel. Creatively art-directed, it breathes life into an old story that has been told many times before, but never like this.