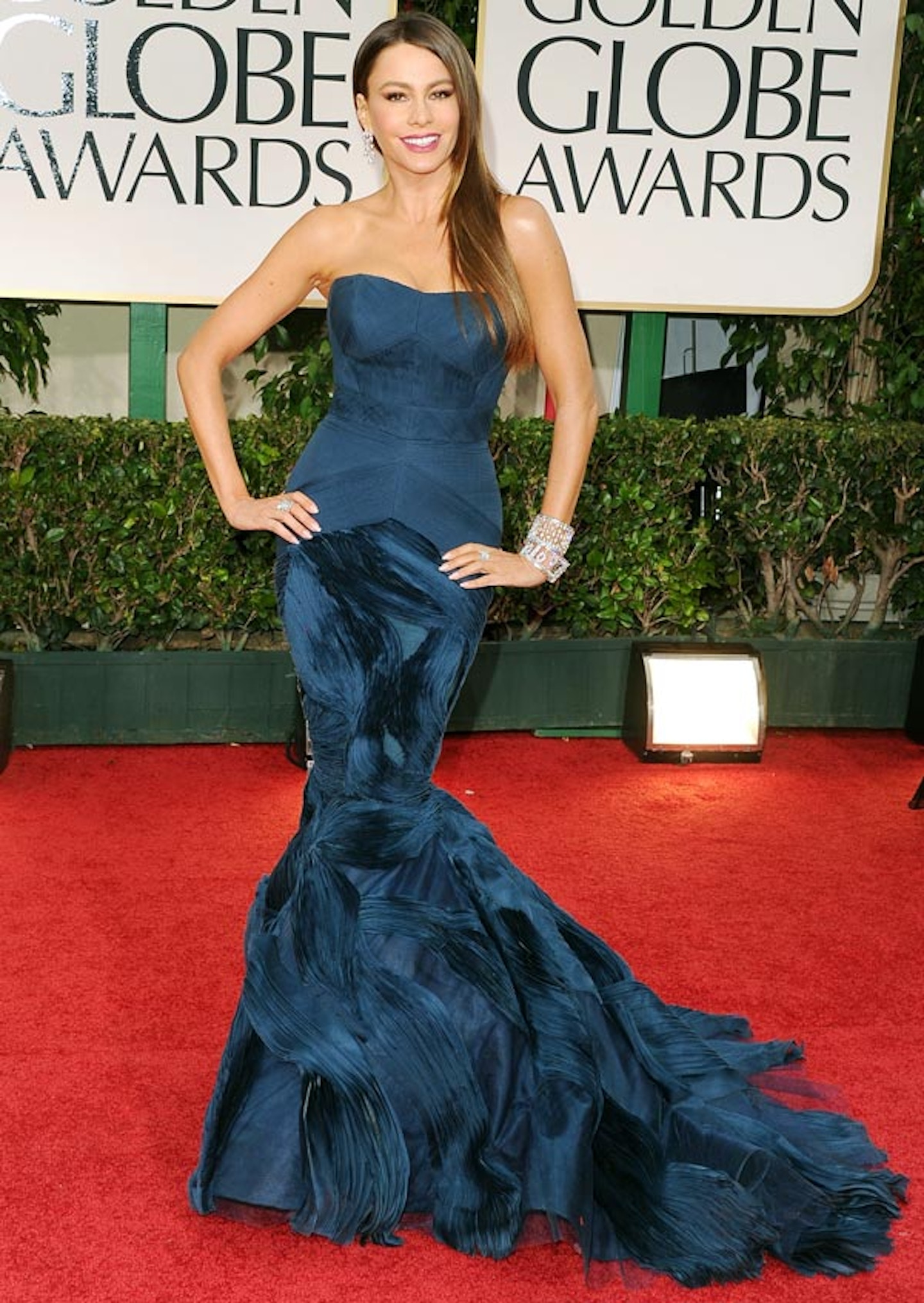 Last night, all the stars (or should I say mermaids) came out for the big awards show that leads up to the SAG Awards and of course, the Oscars. Most stars looked pretty good, and everyone and their grandmother was wearing a mermaid or fishtail gown, but I’m not about mediocrity. Here are my picks for the best and worst dressed stars of the evening.

The Best: (honorable metions include Rooney Mara in Nina Ricci, and Evan Rachel Wood in Gucci)

For a Dame, she looks amazing! Meryl Streep should take notes…

The Descendants star looked elegant and youthful in this pale lilac Marchesa gown. I like the subtle details and movement of this flowy frock.

With her (somewhat) deserved golden statuette in hand, her Madgesty looked amazing in this bejewelled gown.  I think the cap sleeve silhouette compliments her body, and I adore the texture of the skirt. I applaud the Material Girl for keeping her signature style with the accessories. The cross and fingerless leather glove on her hand are so iconic for the star.

Love it or hate it, this gown is a showstopper! With sheer panels and embroidered details on top, she looks like a star of the silver screen. This look is a second home run after her fringe frock (also Marchesa) at the People’s Choice Awards last week.  I love how Michele is referencing the Golden Age of Cinema with these flapper-inspired looks.

Jolie looked like a vamp in this form-fitting silk gown. It wasn’t my favourite look of the night, but the dress has some gorgeous elements to it and it fits Jolie like a glove. Her and Brad were a stunning couple on the red carpet.

Not only did she look absolutely, jaw-droppingly stunning and sexy as a mermaid, her look is also the most expensive of the night. The Modern Family star is dripping in $5 Million worth of jewels from Harry Winston, no less. Her hilarious acceptance speech in Spanish was my favourite part of the night, Vergara is truly the hottest woman alive!

Leave it to Swinton to bring some refined drama to the red carpet. The jacket is an amazing cut and I like the contrast between the masculine jacket and the elegant feminine skirt. The colour is also fantastic on her ghostly fair skin.

This is how it’s done folks. Not only is it refreshing to see a Cavalli gown without leopard print, but the silhouette, accessories and styling is put together and cohesive. It’s an awards show, not the runway and Beckinsale is clearly a star.

This might be my most controversial pick of the night, but I am completely in love with this Marie Antoinette inspired dress. This might be a bias because I love Westwood’s creations, but the silhouette is unlike anything else we’ve seen on the red carpet this year (that’s probably because Helena Bonham Carter is MIA), and the lace details, the see-through peekaboo and the narrower hips update the corseted frock that used to be stuck in the past. Riseborough’s performance in W.E. was spectacular, and her and Madonna shined on the red carpet last night.

Leave it to Charlize to look divine in Dior. The publicity department clearly gave her the better dress. I love the plunging neckline, legslit and flirty flounces on her left hip.  The sparkly brooch at the waist brings some sparkle and her easygoing updo with a bejewelled hairband is youthful and very fresh. I also love her ladylike sandals (thank god Louboutin platforms are on the out) and the way the pale blush pink colour compliments her flawless complection.

The Worst: (honorable mentions include Julianna Margulies in Naeem Khan)

I love Emma Stone, and I love Lanvin, but I don’t love this. There’s something unsettling about the maroon and burgundy tulle, and the gaudy eagle belt pulling it all together. I like the elegant cap-sleeved silhouette, but the colour makes her pale and I hate the racing stripes of deep pink tulle on the sides.

For such a beautiful lady, this is such an ugly, frumpy dress. Without the belt, she’d be wearing a designer blue comforter.

Ack! I didn’t even know dresses with mermaid tails and peplum waists existed! I don’t care if it’s Chanel, this black frock makes her look pale and old… that bustline isn’t doing anything for her either!

It looks like she forgot to put her dress on top of the slip!

I’m sorry but she’s way too old to pull off this frou-frou Barbie dress.

What a sad, sad dress. She was a big winner at last night’s awards and should have chanelled the silver screen legend that got her the award! While she thanked her daughter in her acceptance speech, her dress is very matronly. I hope she pulls out all the stops and sexes it up (at least a bit) for the Oscars come February.

Not only did she blend in with the red carpet, the dress seems to have engulfed the petite 5’2″ star.  The corsetry does nothing for her figure (and completely flattens her posterior), and the shiny fabric looks tacky. I saw her red carpet interview, and it almost looked like slick leather. Her bedhead hair with black roots-natch don’t help either.

There’s no doubt that I have so much respect for the most phenomenal actress of our generation. That being said, she obviously forgot to put on her glasses when picking out this outfit.

Not even a cute tuxedo manicure could save this trainwreck. From the matching green clutch to the untailored long hem, and the patch of moss growing on her chest. She looks more like a Sesame Street character instead of a New Girl.