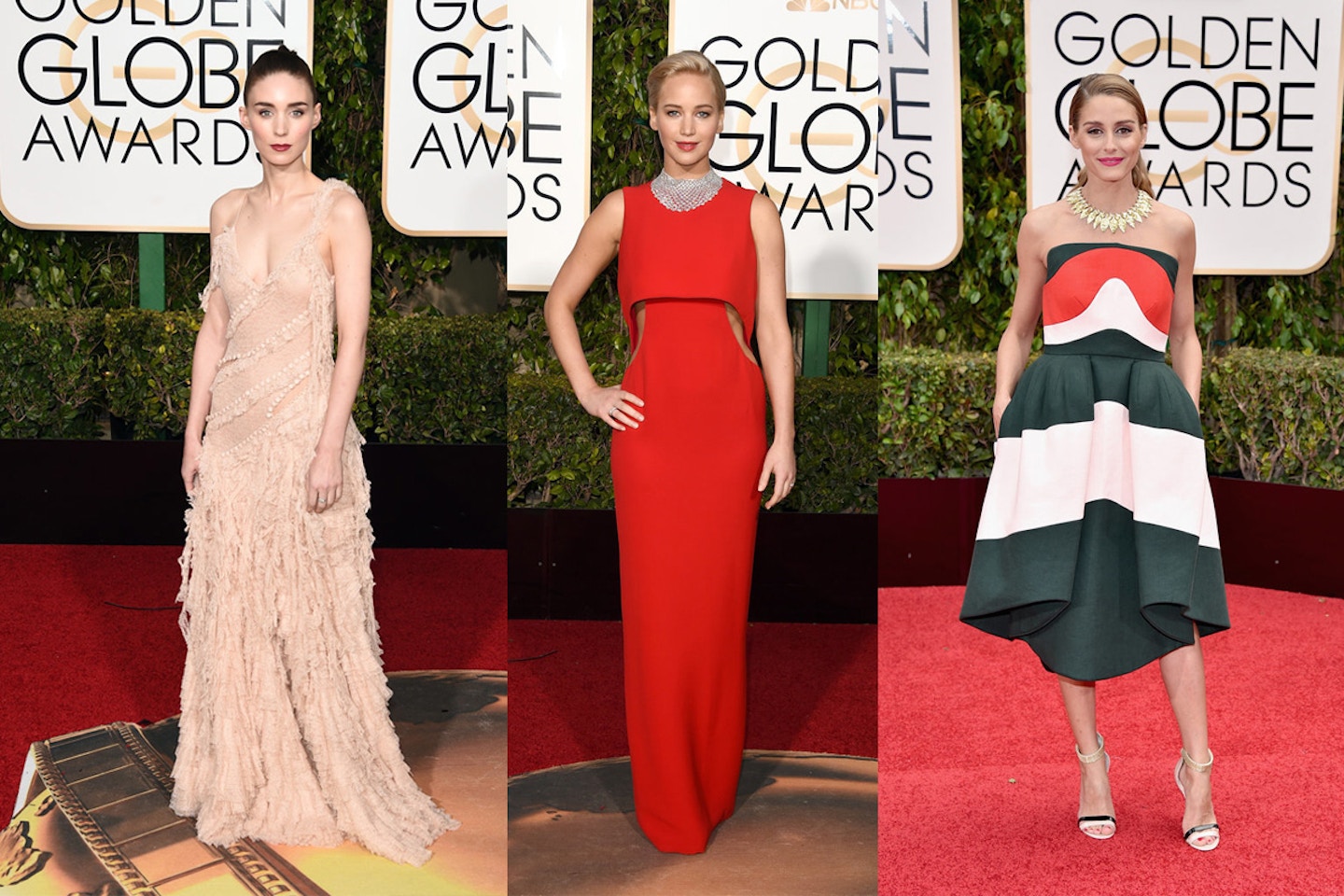 From cool white gowns to bright canary yellows, the stars kicked off Awards season last night in Hollywood. There were no gowns that really blew me away, but here are my picks for the Best and Worst dressed 2016 Golden Globes edition.

5. Lola Kirke donned this stunning mustard gown by Monique Lhuillier with Chopard jewels. I love the grecian draping of the dress and the pearls on her ankle straps… and kudos to her to eschewing grooming standards on the red carpet.

4. Zendaya always brings it to the red carpet, and last night’s moody maroon Marchesa dress (try saying that 5 times fast!) was very unique, but totally in line with the young starlet’s daring style.

3. Gina Rodriguez looked lovely in this navy gown by Zac Posen. It might be a little too grown up and formal for the Globes, but I still really liked it on her, and was a refreshing change from all the blush and white gowns.

2. Saiorse Ronan wore my favourite white dress of the night. She looks so pretty and glowing in this simple drapey gown by Saint Laurent Couture. Just like her performance in Brooklyn, it’s understated, effortless and beautiful to look at.

1. Lady Gaga was the surprise winner of the night, taking home a Golden Globe and a spot as the best dressed. Going full on Marilyn blonde in this curvy, velvet dress by Atelier Versace, it was the only look that stuck out in my mind from the night. The Countess reigns supreme.

5. Heidi Klum wore a silver muppet dress by Marchesa. I know texture is a big deal right now, but she looks like a dirty pipe cleaner.

4. Eva Longoria’s dress was stunning in the back, but the front of this Georges Hobeika dress is a disaster. The random embroidery on her hips looks like she pulled off a table runner, while the double bow isn’t adding anything.

2. Regina Kim wore this crazy sequin number by Krikor Jobatian complete with a cheesecloth cape, the real American Crime at this awards show.

1. The worst dressed of the night goes to Jane Fonda in Saint Laurent couture, without a doubt. This Flamenco frill dress is so ugly, she looks like a Pierrot clown with the ruffles around her neck. The white shoes and accessories make this look even more like the 1980s during Fonda’s heyday… I have to give it to her though, her new face and makeup look perf.

BONUS! Cate Blanchett in Givenchy. I can’t even rank how awful this dress is. It’s just so weird, the fringe, the embroidery, the weird luminiscent pink colour. Let’s see how she steps up her game for the Oscars red carpet.