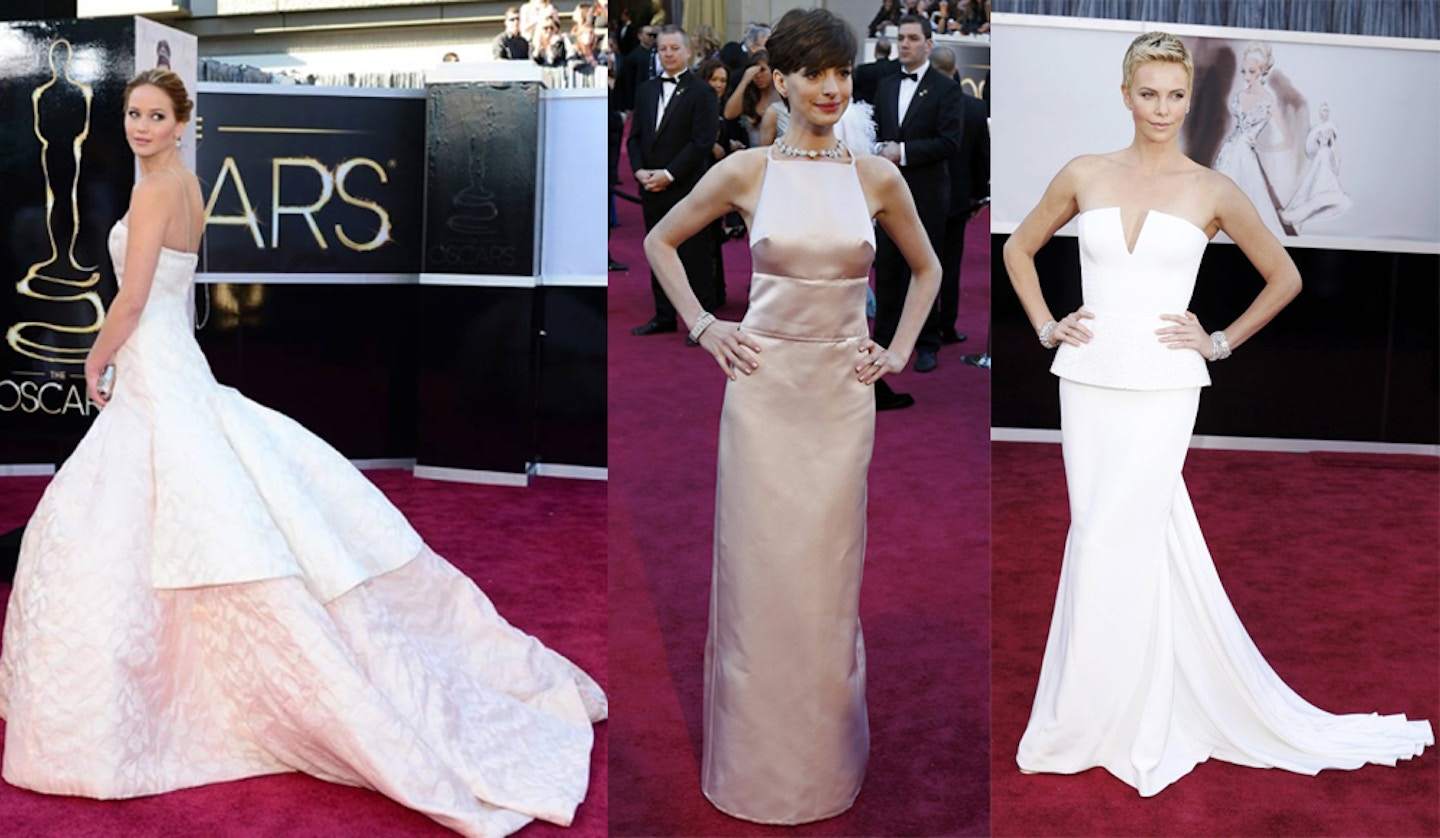 The superbowl of Hollywood brought out the industry’s elite and talented last night, save for Kristen Stewart, who was completely out of it. The ladies were definitely the focus of the evening; I was literally gripping my seat as they announced the winner for best actress in a lead role. Pale-coloured dresses were a huge trend last night. In shades of ivory, cream, beige and pink, all the A-listers wore understated colours. Old Hollywood was another huge trend, with Reese Witherspoon and my fave, Jessica Chastain sporting Veronica-lake inspired waves. Many of the ladies looked stunning, but some missed the mark. Here are my picks for best and worst dressed looks from the 2013 Oscar red carpet.

Amanda Seyfried wowed me in this Alexander McQueen gown. People might think the nude pink colour washes her out, but I love the rich embroidery and the halter neckline.

I would never have a best dressed list without the presence of the ethereal South African beauty, Charlize Theron. She rocked her new cropped ‘do in a very feminine and sleek gown from Dior. I love the simple lines, the crisp white colour and Raf Simon’s new look for Dior.

Jennifer Lawrence looked like an Oscar-winning lady in this Dior Haute Couture gown. She might not be able to say Haute Couture, but she can definitely wear it. I love the voluminous skirt, but what really stood out for me was the backwards Chopard necklace she wore. I spy an instant trend!

Jessica Chastain might not have won best actress, but she was undeniably the best dressed last night in this Armani Prive gown. With her flaming red locks done in Old Hollywood waves, she looks like a modern Veronica Lake. The cognac colour was lovely and elegant against her fair skin and bright red hair. I’ve rarely seen red carpet dressed in this colour, and it looks perfect on her. The dress is fitted to perfection, and the intricate sequin details highlight all of her feminine curves and create a dazzling effect.

Salma Hayek looked like a cross between a greek goddess and a crow. Her Alexander McQueen gown looks costumey, and her overdone hair is not doing her any favours.

Zoe Saldana wore a confusing gown by Alexis Mabille couture. Saldana hit the white trend, but there was too much going on. From the thick belt, to the flowery bustline to the awful, awful grey and black frills underneath, it was overdone and missed the mark.

Anne Hathaway should be at the bottom of my list, because as a frontrunner in her category, she should have dressed the part. This pink Prada dress was a last minute decision, proving that you shouldn’t act on impulse. I wonder what her Valentino gown would have looked like… This dress, however, is just wrong. The column shape is not flattering, and I cannot stand the bust dart that accentuates her nips. I’m so focused on the horrible bust seams that I don’t even notice her $1 million diamond necklace.

Jane Fonda looks like she came right out of one of her 80s exercise videos… just slapped on a longer skirt. There’s something very unsettling with this Valentino (can you believe it?) gown, from the puckering in the centre seam to the neon colour, this is a testament to horrible 80’s fashion. But damn, girl’s still got a bod.

Melissa McCarthy was the undeniable worst-dressed lady of the evening. McCarthy has been criticized for her size, but that is not the issue with this look. Starting at the top, her hair looks like she just got out of shooting an 80’s hairband video and brushed it out. It’s big and makes her look like a lion. The gown itself, by David Meister does nothing for her body. It has a slouchy silhouette and has horrible gathers right at her hips. The material itself is reminiscent of a grey sweatshirt, and the colour completely washes her out. I do like the sparkly details at the cuffs, but it wasn’t enough to save this grey potato sack from disaster.